The Air, Water, Energy (AWE) revenues in the 2022-27 period can increase by 35% with a grey- blue two step scenario or decrease by 50 % in the Tactical Nuke Scenario.

Due to this uncertainty McIlvaine forecasts for air, water, and energy (AWE) products will now include high, base and low predictions. The low will be based on the Tactical Nuke Scenario and the high on the Grey-Blue Two Step.

Tactical Nukes:  Putin does not dominate Ukraine and uses his tactical nuclear weapons for a limited war which leaves Europe and Russia greatly diminished.

Grey-Blue Two Step:  Various green technologies are initially combined with grey technologies which are upgraded to blue over time.

Under the Tactical Nuke scenario the AWE suppliers cannot be pro-active. But the Grey-Blue Two Step will have many pro-active opportunities for AWE suppliers. This is not true of some past crises such as the 2008 financial meltdown.

One of the most important objectives could be to reduce reliance on Russian and Saudi energy.  In the short term the U.S has become the leading supplier of gas to Europe. IEA forecasts that an immediate reduction of European gas needs of 30% can be achieved by utilizing the nuclear and coal capacity and with some consumer restraint.

Longer term solar and wind can obsolesce fossil fuels.  But over the next 30 years we will need to use our fossil fuel resources. Over 20 million tons per year of hydrogen are being produced from coal in China. Indonesia has a big coal to methanol project underway. Pakistan has more energy reserves with Thar lignite than all the reserves of oil and gas in Saudi Arabia. This lignite can be used to create methane, hydrogen, or ammonia. Carbon capture and sequestration can be added later.

Bioenergy with carbon capture is carbon negative. So there is no tipping point. If more carbon negative technology is applied in the 2030-2050 period we can offset any increase in the next 10 years.

All these technologies involving fossil fuels require major investments in AWE products. New AWE systems such as in situ capture of rare earths during combustion will prove to be very cost effective.

Forecasts will be critical for AWE companies not only to prepare for what will be needed but to actually shape the needs.

There was a big proactive opportunity in 1989 with the dissolution of the Soviet Union and the opening of the Chinese market. During  a 20 year period the most successful AWE companies were those who pursued an open world market. The Russian invasion of Georgia and the switch in Chinese priorities from capitalism to authoritarianism started to slow down the progress. The invasion of Ukraine has moved the world back to the 1980s.

It is helpful to compare the impacts of past crises on the AWE companies:

World War II is used as a base for relative magnitude of 10. No event until now compares. It was not anticipated by most. It completely changed the type of  purchasers. The products became valves for tanks and planes rather than automobiles. AWE suppliers were primarily reactive.

The 1973 energy crisis was small in magnitude compared to WW II but created many proactive opportunities for AWE suppliers in coal gasification and liquefaction as well as shale. U.S. utilities ordered 80,000 MW of new coal plants which turned out to be more capacity than has been actually installed in the 1974-2022 period.

Within two years OPEC resumed normal production and the crisis ceased. Rather than continue with energy independence, the U.S. canceled all the partially completed and planned projects.

This is not likely to be the case in the present crisis. The slaughter of innocent Ukrainians and the bravery of the nation have galvanized the free world to escape the OPEC/Russia yoke. The impact could be higher than World War II. It is generally believed that Putin will do what is necessary to stay in power. If he cannot dominate Ukraine he may resort to a war with NATO using his 2000 tactical nuclear weapons. He has a 10 to 1 superiority with these weapons.

This use of the tactical nukes would force the free world to make decisions about mutual destruction using the larger strategic weapons. So assigning a relative risk factor of two times World War II is justified. There is also the potential that Putin could be toppled and the situation become much better.

Many complicated decisions are needed in this crisis. The climate change needs have to be balanced against the high energy prices facing developing as well as developed countries.

AWE companies need to quantify the potential markets and understand the product needs.  These needs can be characterized as cost of ownership factors. The Total Cost of Ownership  (TCO) will be determined by connecting all the sources of wisdom. 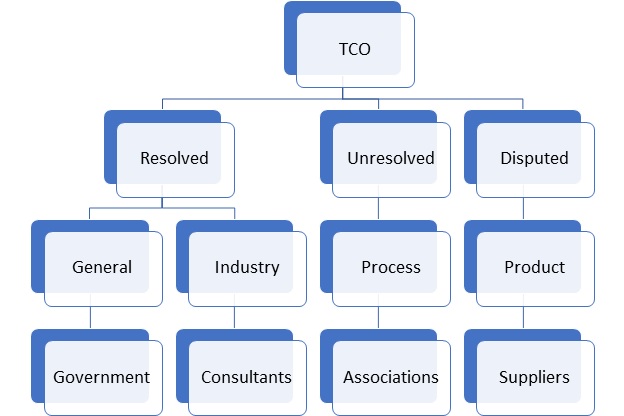 With all the uncertainties caused by the invasion, there are a number of unresolved issues.  Some are general such as climate change versus energy costs. The wisdom of government bodies and consultants will be needed to determine the TCO  factors. Consultants, industry associations, and suppliers will provide industry insights such as green versus grey hydrogen.   System suppliers will compare processes such as hydrogen versus ammonia for combustion.  Product suppliers will provide cost factors for the increased NOx control products required while burning hydrogen.

The product factors will be disputed by individual suppliers and will need to be carefully evaluated. History shows that when one approach is selected initially it is hard to substitute a better alternative.

The Ukraine invasion presents a challenge to the AWE industry. It is one which can be best met with a range of relevant continually updated forecasts along with connection of the wisdom  available from governments, consultants, associations, suppliers and purchasers.

Bob McIlvaine can answer your questions at This email address is being protected from spambots. You need JavaScript enabled to view it. or call him at 847 226 2391.