Desalination System Investment to Exceed $14 Billon/yr. over the Next Five Years

In the next five years, suppliers of thermal and membrane desalination systems will sell systems valued at $73.5 billion of which $21 billion will be spent on brackish water systems and $52.5 billion for seawater systems.  This is the conclusion reached by the McIlvaine Company by aggregating forecasts appearing in its cross-flow membrane, pump, valve and filtration reports. 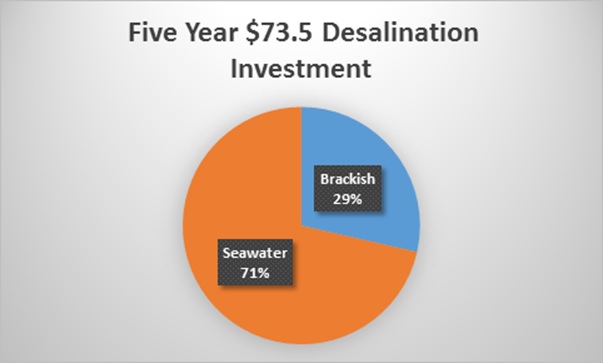 The brackish water forecast is less precise than the seawater forecast due to the definition of the term “brackish.”  This can include total dissolved solids content as low as 500 ppm to as high as 2000 ppm.

The potential for desalination is very high.  In 2015 desalination equaled only 2.3 percent of water delivered by municipalities.  This percentage will climb to 3 percent in 2020.  However, since desalination is utilized by industry and commerce, the desalination capacity should be compared to all freshwater withdrawal.  Power plants withdraw ten times more water than municipal drinking water plants.  Power plants desalinate only a minuscule fraction of their total withdrawal. So the growth potential in power and other industries is very large.  China has issued regulations requiring power plants with seawater access to desalinate rather than extract fresh water.

A significant portion of the seawater desalination investment will be for thermal plants but membrane technology will continue to gain market share.  There are promising new technologies such as electrochemical desalination and forward osmosis which promise higher energy efficiency, greater liquid recovery and lower costs of ownership.

The future of desalination depends on the sustainability criteria which will be used to justify the investment.  The fact that the harm is global but the value local creates different evaluations.  The cost of CO2 according to some EPA analyses is $50 ton. However, CO2 emitted in San Diego does not harm local residents any more than it does citizens of the EU.  On the other hand, desalinated water in San Diego benefits local residents exclusively.  The residents in the Colorado River Delta will be more enthusiastic about a San Diego desalination investment than any other group.  McIlvaine has developed Sustainability Universal Rating Systemto rationalize these different perspectives.

A free webinar to discuss the market will be held on Thursday, July 14, 2016.

For more information on a customized desalination market study contact Bob McIlvaine at 847 784 0012 ext. 112 This email address is being protected from spambots. You need JavaScript enabled to view it.