This year purchases of liquid flow control and treatment equipment and chemicals will exceed $150 billion.  Sales will continue to grow at more than 5 percent annually over the next five years. Two segments which will expand the most are cooling water and sewage treatment. This is the conclusion reached by the McIlvaine Company as a result of its latest forecasts in a group of water related market reports.

The world power industry uses more than one trillion gallons of water per day (1 million MGD) far outstripping other industries. The amount of crude oil extracted around the world each day is only 3,500 MGD. Granted that the cost per gallon treated is far higher for extraction and refining of oil than for power plant cooling water, nevertheless, the disparity in flow rates is more than the disparity in unit treatment costs.  It is, therefore, highly valuable to compare flow rates. 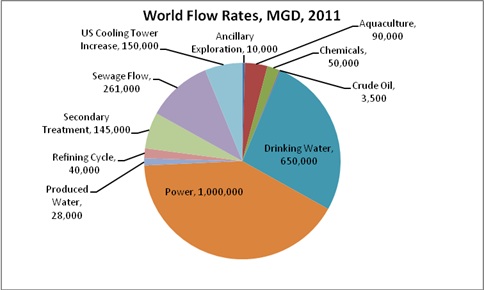 Ancillary exploration involves both oil and gas and the various fluids which are used and recycled in the oil and gas extraction process.  Because of the many steps in the refining process, the flow rate is 40,000 MGD. Various chemical processes involve flow of liquid raw product and separation of solids from liquids or liquids from liquids.

Water is used in many ways besides human consumption. For every gallon of crude oil, eight gallons of water are extracted along with it. The treatment and use of this water rather than disposal in deep wells makes this a growth sector.  However, despite the 8 percent growth rate, the quantity is only 28,000 MGD.

Municipal drinking water is the second largest use category.  Chemical costs per gallon are substantial, but the flow and physical treatment costs are relatively low.

Aquaculture is one of the more promising areas based on its size and growth rate.  Most fish and seafood is now supplied by farming.  Further, there is the trend toward tank farming and more investment in flow and treatment.

The $150 billion market as segmented in McIlvaine reports reveals that pumps and valves comprise more than half the total. 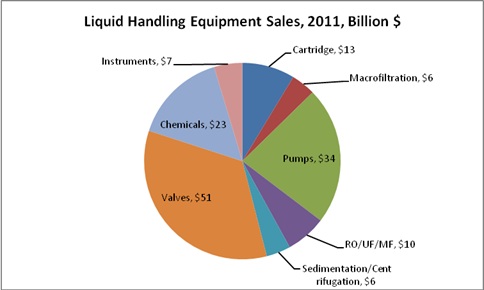 For each of these segments the U.S. proposed rules on power plant discharges represent the biggest near-term opportunity.  Three hundred and forty three fossil plants representing 231,942 MW and 42 nuclear plants representing 60,582 MW combine for a total of 385 plants with 292,524 MW of capacity which could have to install cooling towers and recirculate 150,000 MGD after the final rules are issued next year.

The magnitude of this number can be compared to hot market – produced water. Even if new equipment were purchased to treat 10 percent of the world’s produced water, the total would be only 2800 MGD. Aquaculture is another hot market, but even with an investment to treat 10 percent of this flow, the total would only be 9000 MGD.

The sewage treatment potential is bigger by far than that for cooling water, but this market will be slower to develop.  In addition to a sudden increase in cooling water of 150,000 MGD in the U.S., there is an additional large market for cooling water treatment for all the new coal-fired power plants being built in Asia. Many along the coasts will use once-through water. Some of the inland plants in arid areas will use dry cooling but many will install wet cooling towers and will need all the treatment products and consumables.