The market for selective catalytic reduction (SCR) systems and replacement catalyst will reach a record $7.6 billion this year. This is the latest forecast in NOx Control World Markets published by the McIlvaine Company.

Sales of systems are projected at $6.1 billion. This includes the ammonia injection system, the catalyst, housing and all the ductwork and other components contracted with SCR system suppliers such as Babcock Power, Alstom, or Babcock & Wilcox. 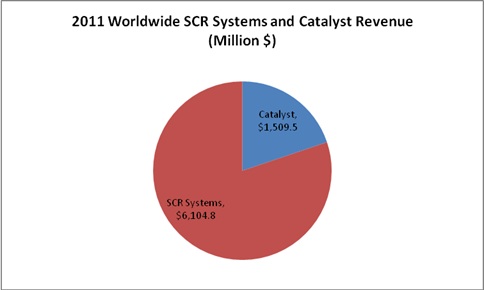 Sales of catalyst are rising steadily. They will exceed $1.5 billion in 2011 mainly due to the replacement needs.  The largest application is coal-fired boilers where catalyst life is less than five years.  Gas turbines are another large application.  Recently there has been a big market in the U.S. for SCR systems for peaking turbines. This has created a need for high temperature catalyst. Several catalyst suppliers have developed a product to meet this need. However, many purchasers are avoiding the risk by using conventional catalyst and bleeding in air to reduce temperatures.

The cement industry is the next big target for NOx control.  There are some SCR systems installed on cement kilns in Europe and a number slated for future installation in the U.S.  Waste incinerators and nitric acid plants are other applications. Biomass-fired boilers present problems because of the poisoning potential of constituents in the fuel.

Asia is the largest geographical market thanks to a big program in China to install SCR systems on new boilers and retrofit SCR on older boilers in the more populated areas.  Japan, South Korea and Taiwan are also significant markets. 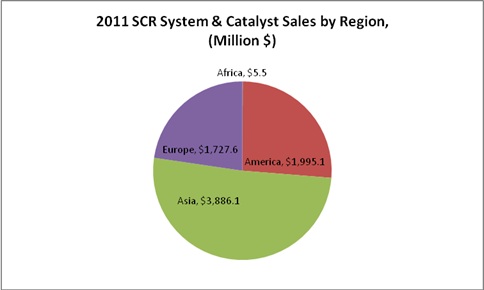 The market in the U.S. is quite active due to recent regulations. It promises further growth based on new ambient air quality rules. These will force individual states to require NOx control not only on large coal-fired boilers but on industrial boilers as well.