The market for small modular nuclear reactors (SMR) could grow rapidly and reach annual sales levels of $153 billion by 2030.  This is the latest forecast in the online N043 Fossil and Nuclear Power Generation: World Analysis and Forecast published by the McIlvaine Company (www.mcilvainecompany.com).

There will be a real market for SMR and all the components. With projects in China and the U.S. at the 125 MW scale slated for operation between 2015 and 2020, there is already significant revenue generation.  One of the outcomes of the Japanese nuclear disaster is a shift in interest from large nuclear power plants to small ones.  Therefore, the revenue stream projections for small nuclear power plants may be more predictable than for the large ones.

The timeline for revenue generation for 100-300 MW projects is split into:

Revenues for consultants and engineers start in the preparation phase and run through startup.  Steel and other raw material revenues would be highest during manufacture and construction. Purchased components should be on site prior to construction. So revenues for pumps and valves would peak a year or two before startup. Some pump and valve revenues are generated when an order is placed and the stream continues through shipment. Additional revenues are generated to assist in startup. There may be an amount withheld until performance guarantees are demonstrated, so this could be well after startup.

Here is the timeline for the B&W Clinch River project and the goal for typical projects once commercialization has been established.

Scheduling and relevance to the revenue streams are shown below:

Argentina’s plan to install a 25-megawatt SMR prototype in 2014 is on schedule. Rosatom Corp, a Russian nuclear company, has said it will sell nearly three SMR equipped barges in 2011. A demonstration high-temperature gas-cooled reactor plant, with twin reactor modules driving a single 210 MWe steam turbine, is slated for startup in 2015 at Shidaowan in China. The B&W Clinch River start is slated for 2020.

There are a dozen or more consortia working on developing SMRs. So even the demonstration plant revenues will be significant.  The B&W prototype is close to startup, so there is modest revenue now. The revenues will likely increase substantially in following years.

Here is a forecast which is based on start date:

If the initial projects prove successful and demonstrate the cost advantages of SMR, then the revenue streams could rise rapidly starting in 2017 when manufacture of vessels and components slated for 2020 startup will peak.

Once the approach is fully commercialized the market could grow rapidly. Variables will include:

With an optimum outcome of the above variables, the growth could be 50 percent per year over the 2023-30 time frame.

With a relatively poor outcome of developments relative to the above variables the growth could be 10 percent per year.  With the optimum outcome revenues would reach $153 billion/yr in 2030.  The manufacturing revenue would be two years ahead or 2028 in the above chart.

The poor outcome of just under $13 billion in revenues in 2030 is by no means the worst outcome.  If developments relative to several of the variables are very negative, the market could evaporate. If an accident of significant magnitude or several accidents of modest magnitude would occur, the market would be greatly impacted.

There is the possibility of a market which is even bigger than the $153 billion. The reason is that even with the optimum scenario, the SMR installed capacity will only be a few percent of the total world electrical capacity.  The present installed generating capacity is 4,000,000 MW. An additional 2,000,000 MW will be added to world generating capacity by 2030. In addition, another 2,500,000 MW of capacity will be replaced.

So net additional capacity over the 2011-30 period will be 4,500,000 MW.  The optimistic scenario only assumes that 2.5 percent of this additional capacity will be SMR.  There is the potential for revenues far beyond the forecast if SMR were to become the preferred energy generation option. 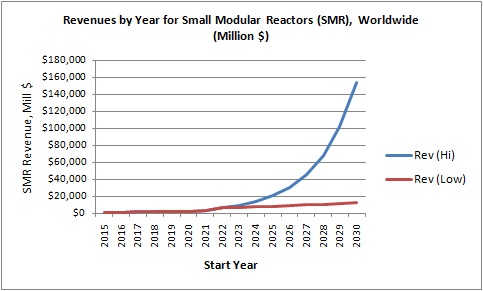