Chemical Revenues for and from Air Pollution Control to Exceed $5.2 Billion by 2020

There is a rapidly growing world market for chemicals to control air pollution and a big potential market to sell the byproducts.  The present market for chemicals used to control air pollution is less than $2 billion but will climb to $3.4 billion by 2020. The market for byproducts will grow from less than $1 billion in 2011 to $1.8 billion in 2020. This is the conclusion reached by the McIlvaine Company (www.mcilvainecompany.com) by aggregating forecasts in several of its online market reports. 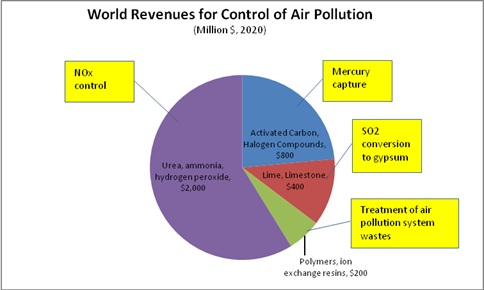 The biggest percentage growth will be in the demand for activated carbon and halogen compounds (particularly bromine) to capture mercury. New air toxic rules in the U.S. will be a big factor. But there are also rules in many countries which require chemicals to capture mercury in waste-to-energy operations.

In Europe virtually all the gypsum wallboard is produced from flue gas desulfurization at coal-fired power plants. The wastewater from scrubbers used in many industries requires chemical treatment prior to discharge.

Europe and the U.S. are major consumers of ammonia and urea for NOx control.  China is expanding its ammonia usage faster than any other country.

The market for chemical byproducts from air pollution control will grow substantially over the decade, but could potentially be much larger than projections.  Air pollution control inherently involves the chemical processes of separation and reaction. Coal contains over 30 chemicals and metals with potential commercial value. Furnaces emit a wide range of valuable metals. In fact, the air pollution control devices in gold smelting operations are big money makers. 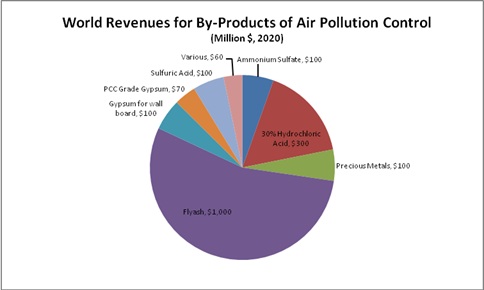 Ammonium sulfate can be manufactured from SO2.   This is a widely popular fertilizer. Most of the gypsum for wallboard comes from power plants. But with the use of lime instead of limestone it is possible to produce a gypsum grade which is of higher value and can be used to replace precipitated calcium carbonate for paper coating.  One of the big potential opportunities is the manufacture of hydrochloric acid at coal-fired power plants.

The basis of this analysis are the following McIlvaine reports: