Over the next 19 years the investment in coal-fired power will more than triple that of natural gas and nuclear combined. However, gas will enjoy the largest percent capacity increase.  This is the latest prediction in the McIlvaine report, Fossil & Nuclear Power Generation: World Analysis & Forecast. 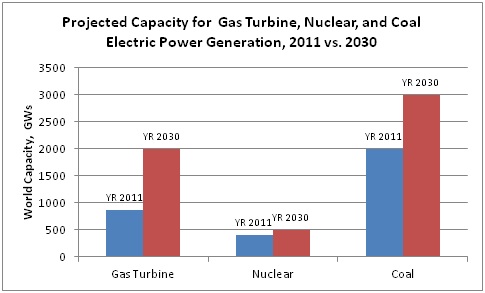 Ironically, the investment in wind and solar is resulting in construction of a large number of peaking gas turbine power plants. These units are flexible and can quickly start and stop to even out the power generation from the fluctuating renewable generators.  The irony involves the low thermal efficiency (30 percent) of the peaking gas turbine plants. This is partially offset by their relatively low operating time, but the net result is that the greenhouse gas emissions of the combination is not insignificant compared to either all combined cycle gas or even coal. The newest coal-fired power plants are more than 40 percent efficient.

There will be more investment in coal-fired power plants but there are also more beneficiaries. There are relatively few beneficiaries in the gas turbine segment.  Siemens, GE and other gas turbine manufacturers are few in number and their offerings comprise the bulk of the potential revenues. So it is not surprising that these companies are expecting major positive impacts on their sales and profits.

The future of nuclear power is going to be shaped by China.  European countries will be retiring more nuclear power plants than they build. China has plans to add more than 150 GW of nuclear capacity by 2030. This is substantially more than the net world increase included in the forecast.  Cost and safety aspects will be critical in determining the nuclear future.