A new concern is that Ukraine will be dominated by Russia in part due to lack of EU intervention due to gas supply threats. Thirty percent of European gas is supplied by Russia at an attractive $9.8/MMBtu. The alternative is to pay $17/MMBtu from other sources as do Japan and Korea.

There is a way for the U.S. to provide more of this gas while boosting the economy and best of all greatly reducing environmental emissions. By upgrading existing coal-fired power plants from subcritical to supercritical efficiency, the U.S. would increase electricity production by 40,000 MW while reducing equivalent tons of CO2 by over five billion tons/year.

The U.S. can supply more of the world’s energy needs over the next several decades. Liquid fuels and LNG can be shipped to Europe and elsewhere. The price of natural gas in the U.S. is presently half that of that paid by the EU and one-third of that paid by Asian nations. The modest cost to convert gas-to-LNG or liquid fuels and ship it to Europe makes this option economically viable at current price differentials. So, the question becomes: Could the U.S. meet its own gas needs and some of Europe’s? U.S. shale gas is a very big resource, but it has limits. Therefore, EIA forecasts that coal use in the U.S. will remain at 2013 levels through 2040. The present plan is to continue to operate the old power plants and not build any new power plants.

There is a novel approach which will meet the planned environmental goals in the U.S. while still helping to provide energy security to Europe. The approach is to upgrade the old inefficient coal-fired power plants to supercritical efficiency. It would be possible to keep CO2 emissions at the same level as under the present plan but to reduce total environmental emissions. At the same time, there would be a huge stimulus to the U.S. economy. Investment in the upgrades will have a good financial return for utilities since coal consumption per kW will be reduced by up to 30 percent. 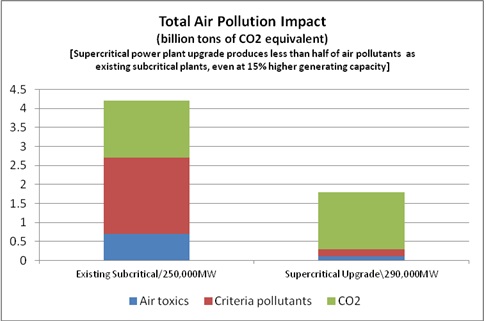 The air pollution impact of upgrading the old fleet to supercritical efficiency would be a reduction equivalent to 2.4 billion tons of CO2. The validity of this calculation is easily determined by using the EPA cost justification values. CO2, various air toxics and each criteria pollutant is assigned a monetary value, so this creates a common metric. There are other environmental benefits. The upgraded coal-fired power plants would not generate the water and solid waste caused by the old power plants. So total environmental impact would be the equivalent of 5 billion tons of CO2 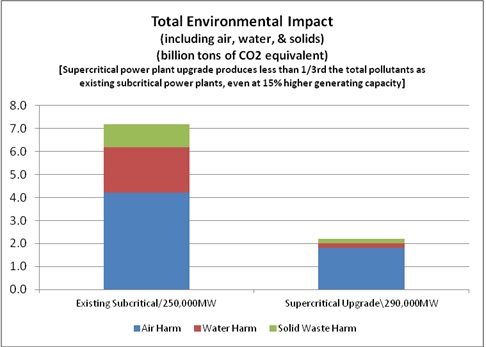 Many existing coal-fired power plants are so situated as to challenge the designer of the upgrade. However, there are many new developments which will make upgrades relatively easy and very beneficial. They include:

The job stimulus to upgrade the old coal-fired power plants would be substantial. Therefore, the upgrade program has political, economic and environmental benefits.