Oil Prices to Impact Pump Markets over the Next Four Years

The pump industry will grow by 17 percent from 2015 to 2019 at oil prices of $80/barrel during the period.  At $40/barrel, the growth will only be 3 percent.  These are the latest forecasts in Pumps World Marketspublished by the McIlvaine Company.

There are a number of variables which will determine the market growth for pumps. New insights are continually generated which justify changes in the forecasts.  The Iran nuclear agreement is just one example. The plunging economy in China is another. However, the most significant development recently is the plunge in oil prices to $40/barrel.

The industrial pump market is dominated by oil and gas which represents 24 percent of the present market.  However water and wastewater, power, refining, petrochemical and other industries account for 76 percent of the market.  The impact of future oil prices on the market can be best predicted by estimating the impact on the individual segments.

Oil and gas can be divided into two segments.  The aftermarket and routine purchases for small projects represent two-thirds of the total or 16 percent of the present total pump market.  The longer term large project revenues represent only 8 percent of the current market.  If the price of oil were to continue to remain at $40/barrel through 2019, revenues in this segment would shrink over the period.

At $40/barrel oil the long range pump product revenue from the oil and gas large project segment would shrink by 75 percent from 8 percent of the current market in 2015 to an amount in 2019 which is equivalent to 2 percent of the 2015 market.  On the other hand, the oil and gas aftermarket and market for small projects would remain flat during the four year period. In fact, the market for pumps for pipelines will be positively impacted as low cost oil and gas needs to be moved to more places. 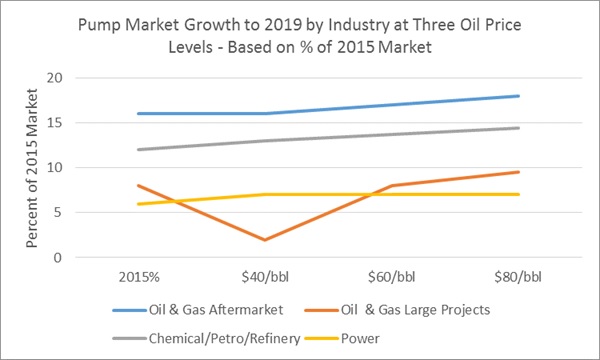 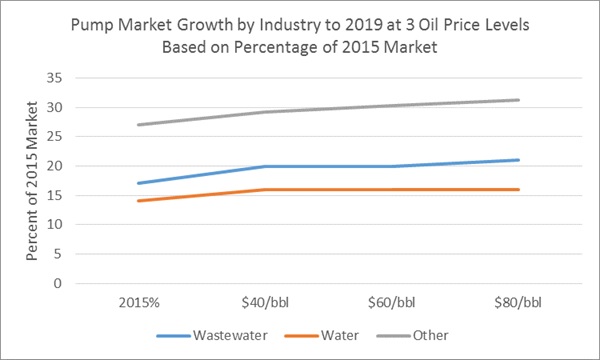 McIlvaine will continue to assess the likely changes in oil prices based on the following factors:

Some of these developments are more predictable than others.  The low oil prices leads to lower extraction activity which eventually leads to shortages and higher prices.  On the other hand, wars, oil spills and earthquakes cannot be easily predicted.  As a result there will be the need for continuous changes in the forecasts to take into account the surprises.