The turmoil in the Chinese economy can have a major impact on the world cleanroom market. Semiconductor manufacturers are the largest purchasers of cleanroom hardware and consumables. China has been the big growth market. China’s semiconductor consumption grew by 12.6 percent in 2014, exceeding the worldwide chip market growth of 9.8 percent. Over the past eleven years China’s semiconductor consumption has grown at an 18.8 percent compounded annual growth rate (CAGR), compared with a 6.6 percent CAGR for total worldwide consumption.

If the Chinese economy continues at a 7 percent annual growth pace over the next four years, the world cleanroom hardware market will grow by 22 percent to 2019.  If the Chinese economy slumps to a 2 percent growth, the world cleanroom hardware revenue growth will only be 14 percent over the next four years. These are the latest forecasts in N6F World Cleanroom Markets. 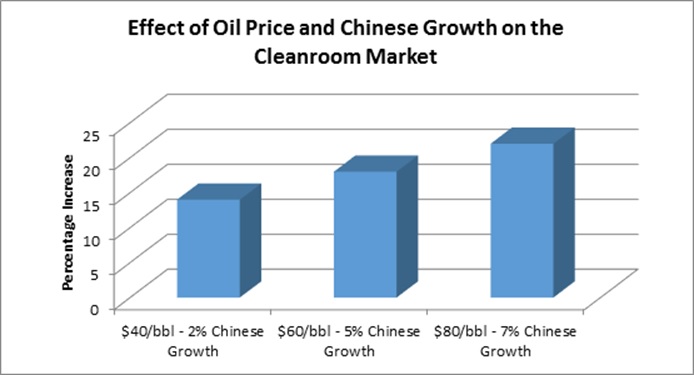 There are consumer demand variables along with changes in technology and political aspects which will continue to shape the market for cleanroom hardware. McIlvaine is therefore making quarterly adjustments to both sets of forecasts. For more informationN6F World Cleanroom Markets, click on: http://home.mcilvainecompany.com/index.php/markets/2-uncategorised/474-n6f-world-cleanroom-markets