The market for flue gas desulfurization systems (FGD) will exceed $6 billion per year over the next decade.  However, whether it is just $7 billion or as much as $10 billion depends on regulatory initiatives which are not yet solidified. This is the most recent forecast in the McIlvaine report, FGD World Markets.

Flue gas desulfurization systems remove SO2 from the stack gases of coal-fired power plants. The market is split between older plants which must retrofit FGD and new plants which must include FGD.  Presently less than half the world’s FGD capacity at power plants is fitted with FGD systems, so the retrofit market is quite large.  In addition many FGD systems in Europe, Japan and the United States are more than 20 years old and must be replaced.

Very few new coal-fired power plants will be built without FGD.  Even some of the least developed Asian countries are installing FGD systems along with their new coal-fired boilers. The potential SO2 emissions from coal-fired power plants far exceed emissions from other sources combined.  SO2, through acid rain, causes damage to trees and buildings.  Recently it has been learned that the SO2 reacts with ammonia and calcium in the atmosphere to form very fine particulate.  This fine particulate is the air pollutant of greatest concern.

The replacement of the U.S. fleet of old coal-fired power plants would substantially reduce CO2 and other pollutants due to greater efficiency.  These plants offer the lowest cost energy generation option.  The $600 billion capital stimulus would be very beneficial to the U.S. economy. Their retirement 25 years after construction would eliminate the main reason new plants are opposed by environmental groups. Each of these plants would have an FGD system.

The market for FGD systems over the next decade can be viewed either with optimism or conservatism. 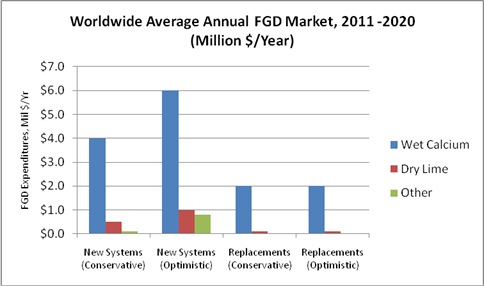 Wet scrubbing systems using calcium to react with SO2 will continue to be the technology of choice.  The gypsum formed by the reaction is used to make wall board.  In Europe and the U.S., FGD is already the main source of wall board raw material. Dry systems using lime are attractive in arid areas where the fuel is low in sulfur. There is a big potential for systems which can make other byproducts such as ammonium sulfate or sulfuric acid.

For more information on:  FGD World Markets click on: http://www.mcilvainecompany.com/brochures/air.html#N027