The techniques developed in the U.S. to fracture shale for the purpose of extracting oil and gas are the foundation of the success of the U.S. economy in the last decade. Developers have continually reduced costs with new techniques such as horizontal drilling. The transport of sand with the correct fracking features from Wisconsin and Minnesota to West Texas has been very costly. One of the most recent cost reductions is to manufacture high quality sand from the lower quality resources available in the region.

The West Texas Permian Basin is relatively arid. Freshwater supplies are limited. The new fracking sand mining plants in the basin add to the large water demand already caused by the fracking process. One solution for the fracking sites is the use of treated municipal wastewater. Another potential is the treatment and use of brackish water. Nevertheless fresh water will remain the main source for the foreseeable future. As a result conservation becomes a high priority. Fracking sand plant suppliers have risen to this challenge by designing systems which reuse as much as 98 percent of the process water needed.

Fracking’s water footprint could grow by up to fiftyfold in some regions of the U.S. by the year 2030. The U.S. demand for water management services associated with the acquisition, transport, transfer, storage, flowback, treatment and disposal of water increased by nearly 50 percent over the last year at a cost of nearly $20 billion. Water management spending for hydraulic fracturing services in the U.S. is expected to total $150 billion over the next decade.

Sand mining plants are tasked with minimizing water use. There were at least five sand mines opened in the Permian Basin by Hi-Crush, Black Mountain Sand and U.S. Silica in 2018 with a proppant supply of 35 billion pounds per year. Many more mines are expected to be opened soon.

These mining plants can be designed to reuse nearly all the water with technology such as filter presses instead of settling ponds. Various treatment chemicals such as flocculants can result in very dry waste solids and little water loss.

Black Mountain Sand provides an example of how water use can be minimized at its Permian Basin mines. Instead of routing the used, turbid water into settling ponds, the system captures it in a settling tank where solids are concentrated into a mud containing anywhere from 25 to 35 percent solids. Next, this mud is pumped at high pressures into filter press membranes where filter press technology squeezes water out of the solids. Thus, instead of losing water to evaporation and ground seepage, the system feeds this recovered water back into the holding tanks to be used again and again. In addition, the wet sand is stored in a specially-designed decant building while awaiting final processing in the dryers. This step helps prevent water evaporation while promoting efficient draining; as water drains from the sand, that water is funneled through a drainage system in the floor directly back into the holding tanks. All told, Black Mountain Sand recycles and reuses up to 98 percent of the water used in its operations.

The challenge for designers of these sand plants is that both the parameters of the incoming sand and the proppant end use change continually. The control system and each of the CFT components has to be integrated with the changing production needs. 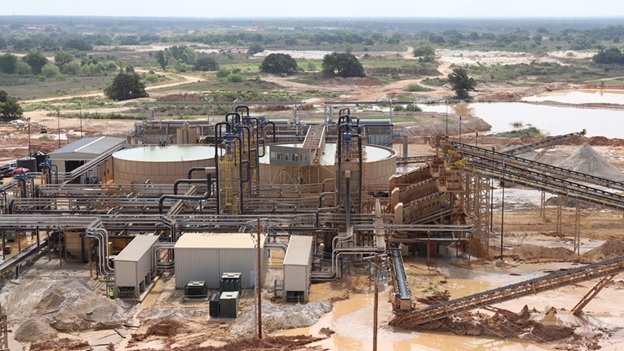 Bob Carter, president of IAC, a supplier of sand plants for the region, was asked how his company addressed the challenge of process variations.

Bob explained, “IAC introduced the concept of optimizing a plant performance including components at every point in time based on the various control points of a plant. A given plant may have multiple control points that become a limiting factor to the amount of feed that can be sustained. A plant that is designed to run at 250 TPH at a given feed gradation may be limited to 125 TPH with heavy clays, 205 TPH with excess fines or 180 TPH with heavy 40/70. Modeling the effect of each control point allows for the optimal sustained feed rate to be identified for a given area of the mine or mine blend ratio. The optimization of the plant prevents unplanned shutdowns and minimizes the amount of water wasted due to not operating the wet plant in its optimal state. It is just like a car, if you push it to high speeds up hill, the miles per gallon of the vehicle drops. If you run a wet plant inefficiently based on its mine reserve, you waste more water than is required.”

The market for specific CFT components for manufactured frac sand for the U.S., Argentina, China and other countries is shown at

For more information contact Bob McIlvaine at This email address is being protected from spambots. You need JavaScript enabled to view it. 847 784 0012 ext. 122