McIlvaine’s recent analysis explained that the Drax National Grid-Equinor program in the UK for biomass firing and sequestration provides an opportunistic route for addressing climate change.  It pointed out that experts range from discounting fossil fuels as a cause for climate change to those who predict a near term tipping point and doomsday scenario.

The problem is what might be described as doomsday by a wealthy Hawaiian setting up trusts for his  grandchildren might be highly desirable for a poor Indian family with no power. The analysis points out that life quality measures as shaped by tribal values and varying discounts of future value vary widely from person to person and country to country.

Japan is a good example. The Fukishima disaster has shaped the outlook of the government and the average citizen. There is a greater worry about a Fukishima repetition than there is about rising sea levels 50 years from now. So the Japanese policy is to expand coal fired power generation through 2028. Simultaneously it has an ambitious program to co-fire biomass and a companion  program to sequester CO2.  This is accompanied by a program to help operators of coal fired boilers around the world improve efficiency.

A flexible and opportunistic policy is made possible because Biomass-CCS results in a net reduction of CO2.  As Drax says it “sucks CO2 out of the air”.  A corollary of this ability is that an existing coal fired plant which can be converted to biomass firing and CO2 sequestration in the future is the most impactful potential tool in the climate change battle.

Here is how the flexibility can be implemented. The trillion tree program is pursued. Biomass co-firing is initiated. The amount of biomass co-fired and the amount of CO2 sequestered depend on future assessments of the impact of fossil fuels on life quality.

The policy can result in a range from modestly lowering coal fired power plant emissions all the way to reducing the atmospheric CO2 levels. 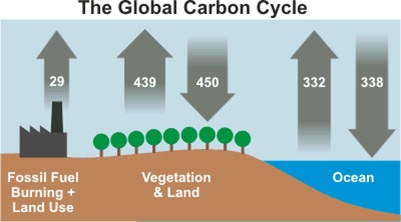 Presently fossil fuels are adding 29 billion tons of CO2 per year to the atmosphere. Coal plants account for 14 million tons. The oceans are absorbing more than they are emitting. 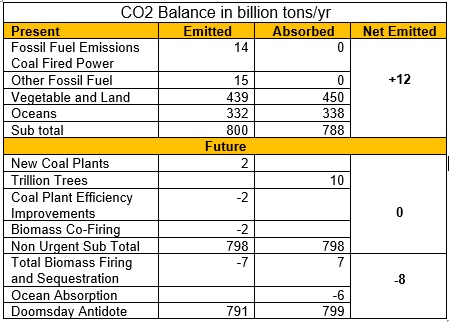 The various biomass co-firing and carbon sequestration programs are continually analyzed in  the Utility Upgrade Tracking System The Opportunistic Biomass-CCS program can continue to discharge 12 billion more tons than absorbed or with the trillion trees and some biomass co-firing reduce the net deficit to 0. If doomsday is envisioned the program can be expanded to maximum biomass combustion and sequestration with the net CO2 at a negative 8 billion tons per year.  So there is no tipping point and the CO2 in ppm each year is reduced.