Decisions such as opening schools and malls are being made without guidance as to the risk mitigation with various technology solution alternatives.  Installing partitions without regard to air direction, turning off air conditioning or even wearing inefficient masks increases risk.

The McIlvaine Company is attempting to determine the best combination for each situation. The challenge is the large number of variables including technologies and products. There are a number of companies and institutions up to meeting this challenge.  We are identifying them and reporting their insights in our Daily Alerts. But we have to put this knowledge into a framework which delivers the best recommendations at any given time.

We start with the holistic approach which assigns values to life duration and quality and economic impacts.  McIlvaine has this structure. It was first created in a project for Cardinal Health relative to single use gowns and is explained at Sustainability Universal Rating System.

The next step is to make available the knowledge from air pollution control, cleanrooms and industrial hygiene. When we do that we realize for example mask and filter efficiency is much more important than has been assumed.

Here is the standard that the cleanroom industry uses to classify rooms.  The cleanest reduces the number of particles less than 0.1 microns to 10. This compares to room air which has 1 billion particles per m3.

This means that if you are wearing an inefficient mask you are inhaling and exhaling billions of particles. From the air pollution control industry we know that some of these particles (e.g. mercury)  may have originated in a gold mine in Brazil and ended up in the Artic. COVID has shown up on air pollution particles in the Lombardi region of Italy. Several studies show greater COVID infection rates in areas of high air pollution. But this may be due to weakened immune systems.

It may be unlikely but possible that a small particle you exhale could be inhaled by someone in China. Assumedly any virus would not be active but on the other hand some studies show that virus is at times dormant and is activated by moisture in the lungs.

The average individual in a room of average air purity will breath in and exhale many millions of particles every minute. Here are the particles by size in each breath. 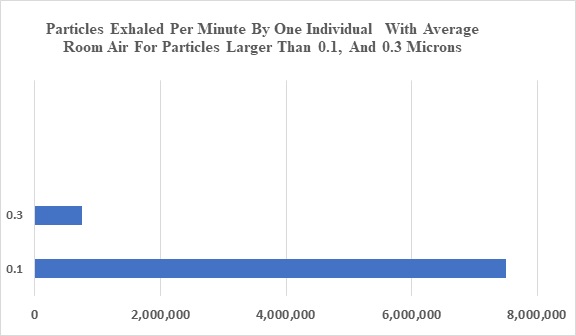 If someone is wearing a cloth mask he will be inhaling and exhaling as many as 8 million particles per minute.  With an N95 mask the number would be greatly reduced

A single cough releases about 3,000 respiratory droplets that travel at 50 miles per hour. Without a mask most droplets are large, and quickly fall to the ground, but many remain airborne and can travel across a room in a few seconds.  With a mask the large droplets are captured on the mask interior and become aerosol generators. A single sneeze releases about 30,000 droplets traveling up to 200 miles per hour. Most droplets are small and travel great distances. The droplets from a single cough or a sneeze emitted by an infected person may contain as many as 200,000,000 virus particles. It stands to reason that most of these virus particles will be discharged from the inefficient mask in subsequent exhalations.

Breathing may release as few as 20 to 30 viral particles per minute. Speaking increases the release of respiratory droplets about tenfold more than breathing; 200 virus particles per minute. A person could become infected after ten minutes of face to face talking with an infected person. Experts are agreed that inefficient masks do not capture the small aerosols caused by breathing and speaking.

Since air  can contain millions of viruses it is necessary to develop robust programs which can deal with large numbers.

The collision rate theory described in our interview with UCSD provides a holistic modeling approach https://youtu.be/F790vEfB4ws 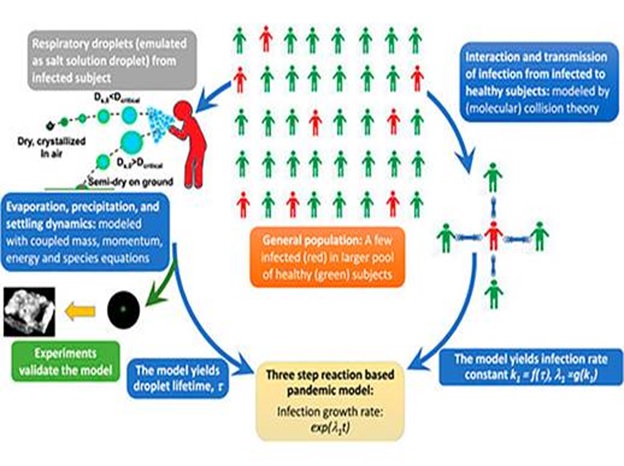 An  automation and monitoring approach with software geared to be actionable is described by Qlair in a McIlvaine interview: https://youtu.be/T0HJF5MVDU0.  Additional information is shown on a July 22 video https://www.youtube.com/watch?v=zYSGZt2g9KI&t=4s 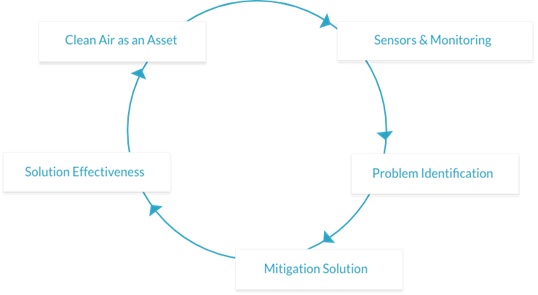 Using this approach we can draw tentative conclusions.  We can use generalizations about the percent of virus generated by coughs and then aerosolized. Cloth masks become aerosol generators. Cough droplets on the inner surface evaporate and then aerosols exit the mask. We assume a situation where 60% of the virus is transmitted through coughing and sneezing and 20% by contact and another 20% by aerosols. 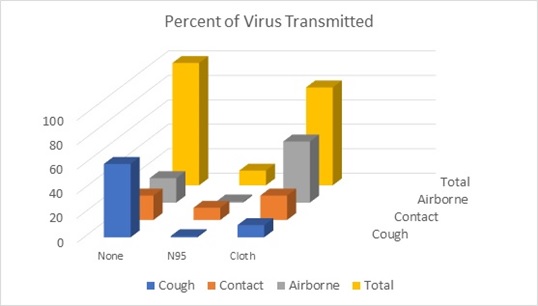 As shown in the above graph the cloth mask reduces the risk of transmission by coughing and sneezing but greatly increases the risk of airborne transmission. Logic and experimental data support this conclusion. But if true why has wearing of cloth masks reduced infections where it is being practiced. One answer is that people who wear masks are also practicing social distancing and other beneficial tactics.

The other answer is that the cloth masks prevent people from receiving sudden surges of millions  of droplets and instead spread viruses out in a diluted form. Could it be that the reason the number of asymptomatic and other unreported cases is ten times higher than reported cases is  due to the dilution effect of cloth masks.

Could cloth masks be unintendedly immunizing people by transmitting dilute virus quantities to them? Instead of sneezing on one person the transmitter is sending a cloud of virus in diluted numbers throughout the area. Before getting too excited about this possibility let’s heed the warning of some researchers who are worried that the small aerosols penetrate the lungs and cause more serious illness than large droplets landing the nasal passages.

The facts are that an efficient mask e.g. N95 is much safer. Mask efficiency should therefore be one of the important parameters in the UCSD collision rate model

qlAir uses CO2 as one measure of people in a space (a version of social distancing). It also can use software which will identify the numbers of people in an area served by an independent HVAC system. This means that output can be delivered using the theory with real time data.

Particulate measurements can be used as a surrogate for viral reduction. Let’s say the HVAC filter cleans the air to where the particulate in the recirculating air is only 20% of the outside air. Therefore it can be assumed that 80% of the virus has also been eliminated.

The virus transmission is a function of the amount  of virus potentially exhaled by transmitters and the amount inhaled by the recipient. 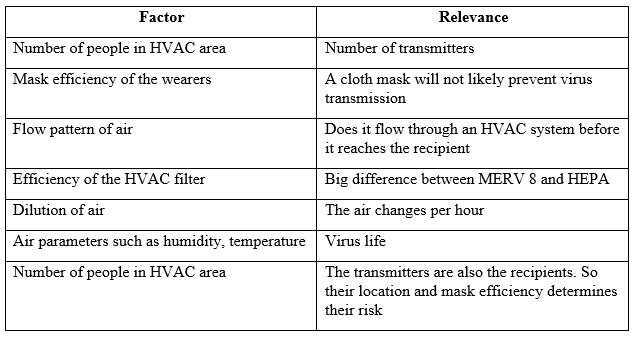 All of this can be quantified  with the sensors and software which can be supplied by companies like qlAir. Their analyses will show the difference  made by efficient filters and masks.

The controlled direction of air flow is crucial. Ideally it should flow clockwise from the emitter to the HVAC system where most of the virus is removed. Then with laminar discharged air any remaining virus is greatly diluted before reaching the recipient. 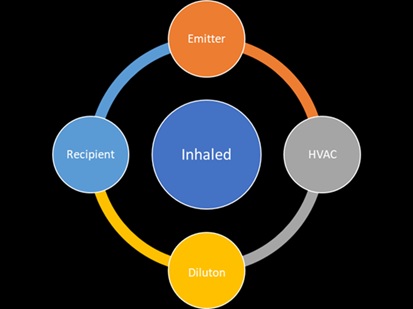 The goal should be to avoid counterclockwise flow from the emitter directly to the recipient.

Counterclockwise Flow with No Masks and Poor Air Flow 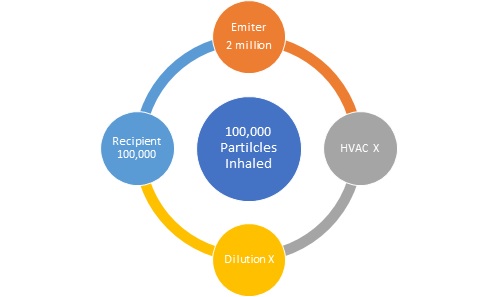 If the emitter exhales 2 million particles directly on to the recipient and neither is wearing masks the recipient could receive a very large dose. It could be as much as 100,000 particles. 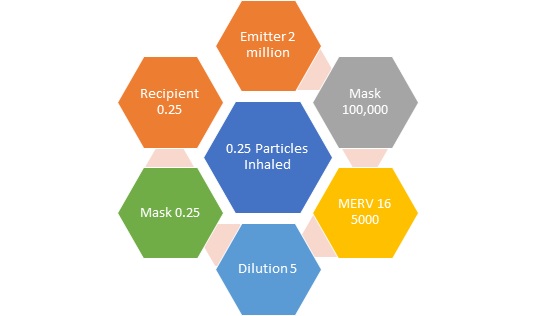 The proactive program, Coronavirus Technology Solutions is explained at www.mcilvainecompany.com