CHP will be an Important Component of a Net Zero Policy

When applied with coal firing CHP has lower net CO2 emissions than a gas turbine as shown in the following table. 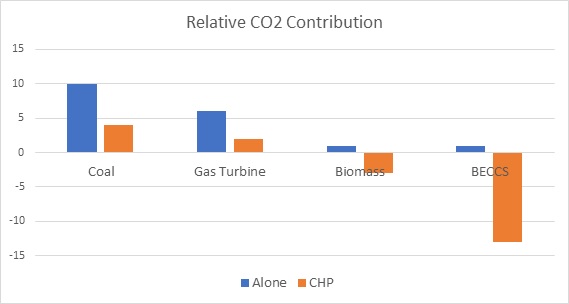 Many CHP plants are fired with gas turbines or reciprocating engines.  Here is a DOE analysis for the U.S. 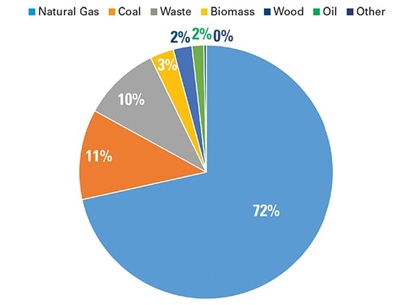 Many of the CHP plants are using biomass. So their net contribution is negative. This is due to the reduction in CO2 emissions from facilities being heated or cooled.

A few CHP plants are moving forward with carbon sequestration. This makes them the most carbon negative option. Whereas wind and solar are net zero BECCS with CHP would be a negative 1.3 tons of CO2 per unit of energy.

A coal plant is plus 1.  If it is converted to biomass and CCS it would be reducing CO2 at a faster rate than it formerly was producing. So in 20 years converted plants could reduce CO2 emissions by the amount they emitted in the last 28 years.

GE predicted a few yeas ago that CHP would replace large scale generation. The basis for this idea is the huge increase in efficiency and the elimination of small CO2 sources such as gas heaters.

The CHP Alliance held a conference on hydrogen and CHP last week. Speakers from Siemens and other large turbine companies were optimistic about hydrogen fueled CHP.

Another potential is commercial greenhouses. The 12 largest in the U.S. have a 680 MW capacity. Most commercial growers use some of the CO2 produced to inject into the ambient air in the greenhouse. At 1000 ppm many crops grow up to 40% faster.

In Europe biomass fired CHP plants are supplying a large amount of power and heat. Several have also added CO2 capture and sequestration.

CHP plants around the world can be identified and the potential analyzed. They all have detailed permits with information not only on the boilers but also the processes. Any process which has the potential to emit air or water pollutants is identified.

Databases and project tracking are found at http://home.mcilvainecompany.com/index.php/databases/42ei-utility-tracking-system