Air Pollution Control is Checkers but Climate Change is Chess 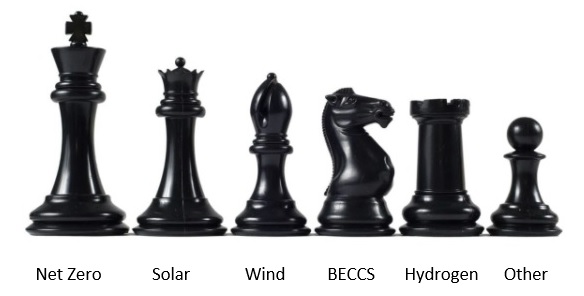 When cigarette advertisements extolled the health benefits, air pollution control focused on limiting the emission of large particles. The harm from SO2 was perceived as forest destruction and damage to buildings.

The move by the opponent was to react the SO2 with ambient ammonia and other chemicals in the atmosphere which created fine particulate. These particles, the size of cigarette smoke, are  now arguably the largest pollutant killer of people.

The challenge in air pollution control has been to use the niche experts in many fields to develop a winning strategy. With climate change the number of needed niche experts is many times more.

Air pollution experts were not wrong but those who came to the conclusions were. When the global warming game expanded to climate change and the potential that a 50 ppm increase in CO2 can cause both drought and floods, it is definitely chess and not checkers.

If fighting climate change is a chess game then the strategy has to deal with the potential for the opponent to pursue a number of unanticipated  tactics. The strategy needs to be flexible to handle whatever tactic is employed by the opponent. It also needs to be one based on winning the game even if pawns are sacrificed along the way.

Solar and wind are obvious tactics. If long term storage becomes economic, they can be the queen and bishops in the game. However, there are many citizens of the world without electricity. Fossil fired power is the quickest way to provide them with what they need.

The most flexible approach is one where carbon negative technologies are also employed. This eliminates a tipping point.

Carbon negative approaches involve biomass. The trees or plants absorb CO2 as they grow. If they are then combusted and the CO2 sequestered the CO2 in the atmosphere is reduced. This technology is labeled Biomass Energy with Carbon Capture and Sequestration (BECCS)

Solar and wind are carbon neutral. So is biomass combustion. Sequestration can be a subsequent move. Solid fuel boilers and gas turbines can be utilized. The problem is that if you tear down existing fossil plants you eliminate possibly one of the best moves.

Very little capital cost is required to switch a coal fired boiler to burn biomass. Little time is required for the conversion. A number of gas turbines are hydrogen ready.

The UK has embraced this flexible strategy. The 4000 MW Drax station now is carbon neutral with biomass combustion. By 2030 this one station will  sequester CO2 and meet the national carbon negative goals.

More new coal fired plants are being built in Asia than ever existed in the U.S. and Europe. At nominal increased cost these plants could be made biomass ready from inception. They can switch gradually to 100 percent biomass combustion. Eventually they can capture and sequester the CO2.

If all the world’s coal plants and gas turbines switched to BECCS, the CO2 content in the atmosphere would go down as rapidly as it rose.

This flexible game strategy will be able to deal with the surprises which are sure to come. To say that we knew nothing at the cigarette peak but now know everything would be very unwise.  The climate change opponent will inevitably surprise us.

We don’t want to be like Cheshire, Ohio which  benefited not only from SO2 reduction from the nearby power plant but also from a new NOx control system. The benefit was short lived since a catalytic reaction spewed sulfuric acid on the town and made it uninhabitable. Better NOx catalysts solved the problem but not before cities around the country experienced similar problems.

The McIlvaine Company tracks all the technology and projects in http://home.mcilvainecompany.com/index.php/databases/42ei-utility-tracking-system

Market forecasts for all the air, water, and energy products and services required for net zero  are described under markets at www.mcilvainecompany.com