Many areas of the world are without adequate natural gas supplies.  They can import coal but prefer gas because of its environmental advantages.  Renewables do not offer quantities of energy at reasonable cost in the near term.  Liquefied natural gas (LNG) can supply the growing energy needs of the developing world.  These needs have resulted in plans for LNG gasification, transport and regasification investments exceeding $1 trillion.  This is the conclusion reached by the McIlvaine Company in N049 Oil, Gas, Shale and Refining Markets and Projects.

Over the next five years, owners will invest in new facilities generating 120 million tons per year of LNG.  Investment costs will vary greatly from site to site depending on location and process.  Construction at regasification sites (brownfields) could be as low as $500/ton of annual capacity.  Floating liquefied natural gas (FLNG) could exceed $1800/ton.

At an average of $1200/ton, annual purchases will be $29 billion and the five year totals will be $144 billon. Equipment will represent 30 percent of the total or $6.6 billion per year.  Nearly 800 MTPA (million tons of LNG per annum) of capacity is in the proposal stage representing investment of nearly $1 trillion.

Demand is expected to grow on an average of more than 5 percent through 2030.

U.S. projects at existing regasification plants have a competitive edge compared to other proposed projects globally. More than 50 liquefaction projects have been announced.  Proposed capacity in the U.S. stood at 269.6 MTPA as of the first quarter of 2015, mostly located in the Gulf of Mexico. Proposed capacity in Canada reached 345 MTPA, including nearly 160 MTPA proposed in 2014 alone. 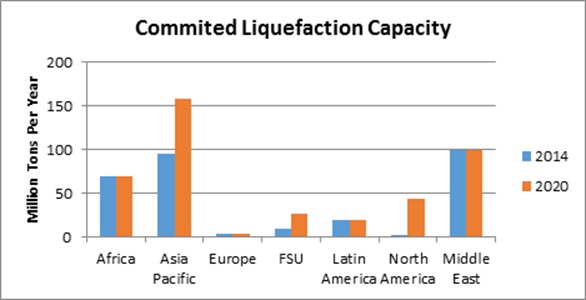 There are non-economic factors affecting decisions. They include security of supply and political considerations that will impact the investments in many regions. China is a notable example.

In November 2015, China approved a $20 billion pipeline for transporting gasified coal from northern and western China to cities throughout the country.  It is designed to handle 30 BCM (billion cubic meters per year).  The use of gasified coal will reduce demand for LNG in China.  The longer term plan is for as much as 200 BCM.  If China is able to gasify coal reliably and economically, there would be a big negative impact on the world LNG market.