In 2017, suppliers of cleanroom hardware will be paid over $5.6 billion by semiconductor, pharmaceutical and other operators of cleanrooms around the world.  Over 2.3 million people will be working in cleanrooms. This is the latest forecast in N6F World Cleanroom Markets. 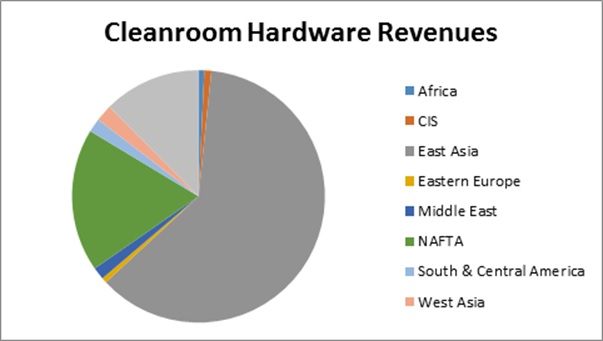 East Asia will be the regional leader with three times the revenue in NAFTA.  This is due to the concentration of semiconductor, memory and flat panel display manufacturing in the region.  The NAFTA market share is mostly due to its leading position in pharmaceutical manufacturing.

As of December 2015, Taiwan led all regions/countries in wafer capacity with nearly 22 percent of worldwide IC capacity installed in the country. Taiwan surpassed South Korea in 2015 to become the largest capacity holder after having passed Japan in 2011. China became a larger wafer capacity holder than Europe for the first time in 2010.