The market for water treatment chemicals for gas turbine plants is growing at rates considerably greater than GDP.  This is the conclusion in the continuously updated N026 Water and Wastewater Treatment Chemicals: World Marketpublished by the McIlvaine Company. Sales in the Americas will top $670 million in 2017. 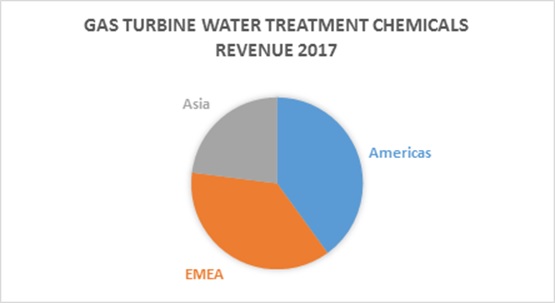 Sales in EMEA will be $50 million less than in the Americas. Asia is still primarily relying on coal. As a result, 2017 treatment chemical sales will be $385 million.

The use of water treatment chemicals is primarily in the steam cycle loop.  However, in hot try climates, fogging nozzles are used to add mass to the intake air. This water must be ultrapure to avoid damage to the turbines. The use of fogging nozzles is widespread in some countries within EMEA.  This large region has areas where treatment chemicals markets will grow robustly and others where growth will be low.

The energy mix for power generation in Europe varies greatly, from France with 76 percent nuclear power, to Norway with 97 percent hydropower, to Poland with 80 percent coal-fired generation.  The drivers affecting future energy mixes are very complex and often contradictory.  Global warming and air pollution concerns are driving power generation away from coal.  The Fukushima disaster in March 2011 is driving some countries (such as Germany) away from nuclear power.  High gas prices have led to an overcapacity of gas-fired generation in Western Europe.  The only clear winner appears to be renewable energy.

Countries in the CIS region rely on a diverse mix of fuels for power generation.  For example, Belarus relies almost exclusively on natural gas, Kazakhstan heavily on coal (81 percent) and Ukraine largely on nuclear power (45 percent).  In reality, however, Russia is the dominant force in the CIS.  With huge natural gas reserves, Russia uses natural gas to generate roughly half of its electricity.  Until very recently, however, gas-fired power plants in Russia have been conventional steam plants rather than open-cycle or combined-cycle gas turbines.  The country previously emphasized standardization in power plant design and foreign OEMs encountered difficulties introducing new technologies due to Russia’s strict codes and standards.

Russia began to liberalize and privatize its power market around 2008.  One goal of the privatization program was to boost the installation of new, more efficient power generation facilities so that more gas could be freed up for the international market.  Liberalization efforts have created a trend away from highly standardized power generation toward more optimized and tailored combined cycle solutions.  Russia had only 3 GW of combined cycle capacity at the end of 2008, but added another 13 GW over the following five years (2009-2013).  Continuing growth is expected.

Africa’spower sector is split into two distinct regions; northern African nations rely almost exclusively on oil and natural gas, whereas South Africa relies on coal for over 90 percent of its power generation.

The Middle East relies primarily on oil and gas for power generation, largely because the region has ready access to significant oil and gas resources.  A sharply rising demand for power in the region is being driven by population growth, a rapidly expanding industrial sector, the high demand for air conditioning during the summer months, and heavily subsidized electricity rates.

The market for treatment chemicals in power and other industries is analyzed in in N026 Water and Wastewater Treatment Chemicals: World Market