The U.S. will install gas turbine systems next year worth more than $30 billion while the rest of the world will install systems worth $57 billion.  Most of the systems will be designed for combined cycle operation with a steam turbine and heat recovery steam generator.  These are the latest forecasts in 59EI Gas Turbine and Combined Cycle Supplier Program. 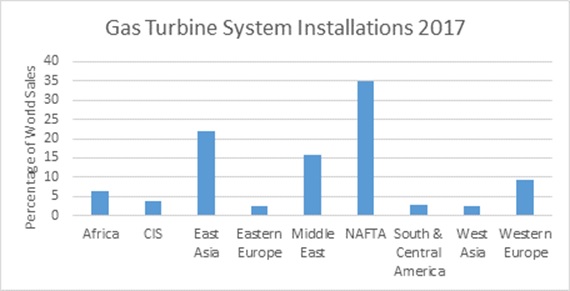 The availability of inexpensive gas in the U.S. coupled with environmental initiatives to retire coal-fired power plants are leading the swing toward gas turbines.  Solar and wind are growing rapidly in the U.S. but from a very small base.  Gas has, therefore, been the fuel of choice.

The gas turbine power plants being installed next year were ordered more than one year ago.  Suppliers of the turbines with longer lead time have realized revenue from 2017 installations as early as 2014.  High performance pumps and valves have lead times around one year.  General purpose pumps and valves for 2017 installations could be ordered in 2016 or even early 2017.

The financial statements of suppliers also reflect the fact that final payments are often withheld until after successful operation has been achieved. Therefore, revenues and costs for major items could extend into 2018.