The world steel industry will spend over $1.7 billion this year for valves, parts, and service. Many of the valve decisions will be made from the headquarters of large international operators. This will necessitate a new marketing approach by valve suppliers. 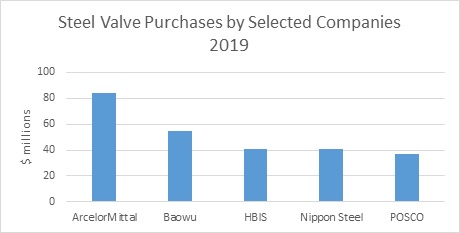 As the world’s largest steel manufacturer, ArcelorMittal makes almost as much steel as India itself. Yet India must more than double steel output by 2030 if its smart cities, bullet trains, advanced manufacturing and safer housing are to become reality. ArcelorMittal, with its partners Nippon Steel and Sumitomo Metal is presently bidding to buy Essar Steel which is a large bankrupt Indian Steel company.

Lakshmi Niwas Mittal owns controlling shares in Arcelor Mittal which he founded. He is one of the world’s wealthiest individuals and sits on the board of Goldman Sachs. He grew up in an Indian family in the steel business. Until the 1990s, the family's main assets in India were a cold-rolling mill for sheet steels in Nagpur and an alloy steels plant near Pune. Lakshmi Mittal decided to strike out on his own and opened his first steel factory PT Ispat Indo in Sidoarjo, East Java, Indonesia in 1976.

He then founded ArcelorMittal which is now the world’s leading steel and mining company, with annual achievable production capacity of approximately 113 million tonnes of crude steel, driven by 197,108 employees working in 60 countries.

It is also a mining leader. ArcelorMittal has a global portfolio of 14 operating units with mines in operation and development and is one of the largest iron ore producers in the world.

ArcelorMittal works with more than 70,000 direct suppliers, covering an annual spend of around $50 billion for raw materials, energy, industrial products and spares, as well as various services.

It manages a complex supply chain, using the principles of total cost of ownership. If it purchases Essar Steel it is likely that major valve decisions will be made in Luxembourg or in one of nine shared services centers the company operates worldwide.

With remote monitoring of valve operations and data analytics the company will have the background data to determine the lowest total cost of ownership. It has invested heavily in IIoT working with ABB, Schneider Electric, GE, Siemens and others. At the Olaberria plant in Spain, as an example, valves associated with the melting, dust collection and other equipment are continuously monitored and data analyzed.

Valve suppliers looking to increase sales in India as well as in other countries will want to consider the following:

The McIlvaine N028 Industrial Valves: World Market provides 50,000 forecasts of valves by type, end use location, and industry. It also includes forecasts for the 200 largest customers

A program including forecasts for thousands of prospects is also available. Details are provided at www.mcilvainecompany.com   Bob McIlvaine can answer your questions at This email address is being protected from spambots. You need JavaScript enabled to view it. 847 784 0012 ext. 122.