Largest Coal Fired Power Pump Market is in the RCEP

Most of the new coal fired power plants will be built in Asia. The region already operates more coal fired power plants than the rest of the world. The U.S. has willingly given up its quest through the Trans Pacific Partnership to be a major player in the Asian coal fired power combust, flow, and treat (CFT) market. International CFT suppliers are unwillingly losing an advantage which will be difficult to overcome. A new trading group in Asia includes Chinese financing for plants throughout the region. The plant suppliers include a number of large Chinese companies.

China has more than 40 percent of the existing coal fired boiler fleet. It has 80 percent of all the coal fired power plants less than 20 years old. This means that much of the experience with newer pump designs resides in China.

Coal fired power will remain the largest purchasing segment in the world power industry over the next five years. 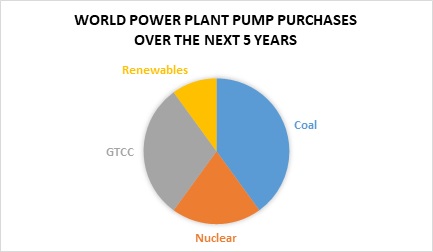 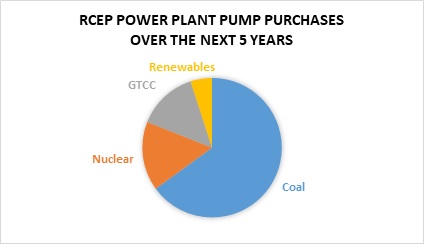 RCEP will be the major purchaser of power plant pumps over the next five years. 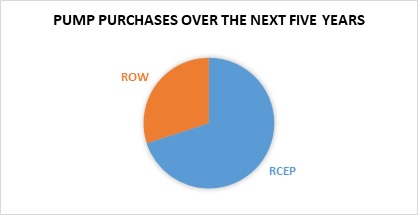 Environmental upgrades have been a good source of pump business. For example a limestone scrubbing system for a coal fired plant requires an investment of more than $100 million. Of this total over $2 million is for pumps. The addition of 200,000 MW of FGD systems in the U.S. spread out over three decades resulted in less than $1 billion of dollars of revenue for pump companies. China has now installed over 900,000 MW of FGD systems. Other countries in RCEP will need another 400,000 MW of new and retrofit systems. India is presently retrofitting more than 50,000 MW of FGD.

Repair parts and maintenance for pumps used for recycling limestone slurry is substantial and represents a larger expenditure over the pump life than does the original investment. So the combined market for new pumps and repairs in the power industry will exceed $3 billion in 2019.

For more information contact Bob McIlvaine at 847 784 0012 ext. 122 This email address is being protected from spambots. You need JavaScript enabled to view it.