LNG is a Most Profitable Market for CFT Suppliers

Combust, flow, and treat (CFT) products are important components in liquefaction of natural gas, the transport of those liquids by ship or land and their regasification prior to use. It is desirable for a CFT supplier to assess this opportunity based on the basis of the profit which can be obtained by pursuing it. This Most Profitable Market (MPM) can be defined as the market which yields the highest profit given the resources available.

High Growth: High growth markets have less competition and a bigger profit opportunity. LNG will be experiencing rapid growth. Over the next few years the U.S. will lead in liquefaction construction. Regasification facilities will be constructed in many countries. LNG represents just under 10 percent of the global gas supply. LNG continues to be the fastest-growing gas supply source. The expected world compound annual growth rate is 4 percent a year between now and 2035. However growth in the next 5 years will exceed 7 percent.

2018 liquefaction capacity was 370 million tons per annum (mtpa). 875 mtpa of new liquefaction capacity is proposed. 92 mtpa is under construction. Global regasification capacity is 851 mtpa. There are 478 LNG vessels with more than 20 new vessels per year being commissioned. In 2023 Australian capacity will exceed 80 mtpa compared to 100 mtpa in Qatar and 65 million mtpa in the U.S. The U.S. will experience the fastest growth from a base of 20 mtpa in 2017. 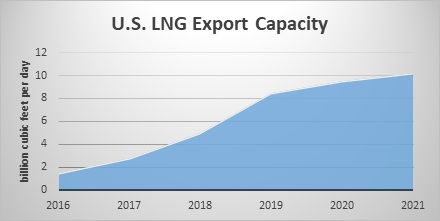 Challenging Applications: The CFT opportunity is more than $3 billion per year. Of this total more than 60 percent of the applications are considered high performance. These are components subject to severe or critical service.

Purchaser Desire to Buy Based on Lowest Total Cost of Ownership: Due to the severity and criticality of the service there is a big incentive to buy the product which is not necessarily lowest in cost to handle the extreme requirements surrounding cryogenics, thermal dynamics and velocity control.

Ability to Validate Lowest Total Cost Of Ownership: Due to the need for high performance it is relatively easy to engage decision makers in discussions relative to cost of ownership. However a convincing case has to be made based on evidence not only of a product’s cost saving features but, on its performance, relative to competitor options.

The LNG market will be a Most Profitable Market for many CFT suppliers due to its size, rapid growth and challenging applications. A relatively few decision makers are incentivized to select products with the lowest total cost of ownership. They have the background evidence to evaluate the conflicting claims of various suppliers. The result is that they are willing to pay higher prices for the better products. This in turn results in greater profits for the supplier.

The Most Profitable Market Program is described at www.mcilvainecompany.com

Market reports on specific components and systems are described at http://home.mcilvainecompany.com/index.php/markets