Combust, Flow, and Treat (CFT) Market in Oil and Gas is Large but Volatile

The drone attack on Saudi oil fields last week is just one of a number of indicators that the CFT oil and gas market will be very volatile. The basis of the volatility is;

The CFT investment per unit of gas or oil varies by 1000% depending on the source.

The investment in CFT equipment, consumables and service varies greatly. Here is a comparison using conventional extraction as the base.

Political events such as the tariffs, embargoes and terrorist bombing of production facilities have considerable impact on the source and quantity of oil and gas

The amount of gas and oil which can be extracted at low cost is finite and shrinking. The nations with the most available resources would be economically best served by a strategy which maximizes revenues over 20 or 50 years and not one which maximizes revenue year to year. Production can be curtailed to raise prices and profits over the long term. It can also be curtailed due to embargoes as demonstrated by the U.S. sanctions against Iran.

As witnessed by the drone strike last week, production can be curtailed. Houthi rebels in neighboring Yemen claimed responsibility for what would be one of their largest-ever attacks in Saudi Arabia. The production shutdown amounts to a loss of about five million barrels a day and close to 5 percent of the world’s daily production of crude oil. The kingdom produces 9.8 million barrels a day.

The attackers created large fires at Hijra Khurais, one of Saudi Arabia’s largest oil fields, and at Abqaiq, the world’s biggest crude stabilization facility. Khurais produces 1.5 million barrels a day while Abqaiq helps produce up to 7 million barrels a day. As the world’s biggest exporter of oil, Saudi officials are discussing drawing down their oil stocks to sell to foreign customers to ensure that world oil supplies aren’t disrupted.

China has the potential to convert coal to syngas and chemicals and to fracture shale to produce enough oil and gas to eventually become self-sufficient.

The U.S. initiatives to prevent flow of oil from Iran have spurred action by oil importers. Chinese oil industry executives said this past week that China’s oil industry must have a contingency plan in case the trade war takes another turn for the worse - China’s oil import dependence is at 70 percent currently, this makes it very vulnerable. However, it has the capability to develop its coal and shale reserves and become self-sufficient. Most of the fuel will come from coal which requires the most CFT investment. China has shale reserves which are greater than those in the U.S. The geology of the reserves makes it more difficult and expensive but Sinopec is confident that it has developed the technology for economic extraction.

China Petroleum & Chemical (Sinopec) several years ago received Beijing's approval for a mega project to turn coal into natural gas as part of the mainland's strategy to increase energy efficiency and cut reliance on oil and gas imports.

The amount of CFT products and services needed to gasify coal is apparent from the process schematic. 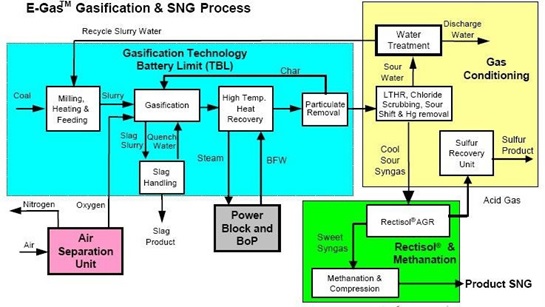 McIlvaine believes this process can be more economical with the extraction of rare earths. This can be done at very little cost by combining the particulate removal and chloride scrubbing steps as shown in the above the process. The technology is discussed at Join the Debate on Insitu Rare Earth Recovery

The cost of gasification is low enough that chemicals can be economically produced. Most of the world’s ethylene glycol is produced from ethylene, a basic chemical that is typically made by cracking oil or natural gas in a petrochemical plant.

But the pace at which coal-based production is being implemented in China is spectacular. “From nothing in 2011, China now has 3.5 million tons of coal-based ethylene glycol capacity”, says Cao Mengting, a polyester consultant at CCFGroup, which is focused on the Chinese fiber industry. By 2022, this capacity will have doubled, she expects. Today, coal-based facilities represent about 40 percent of China’s ethylene glycol production capacity and 14 percent of actual output, according to Michael Zhao, another CCFGroup consultant. In five years, he expects coal-based facilities will account for 20 percent of the country’s output, while production capacity will be half of the country’s total. 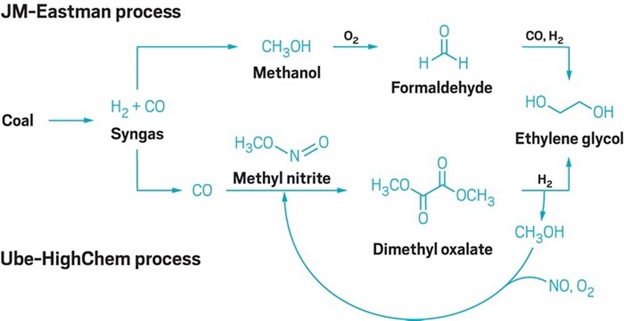 Hydraulic fracturing is creating oil and gas at costs much lower and quantities larger than anticipated.

The oversupply of the natural gas will be reinforced by a new surge in associated gas production from the Permian Basin. Even the increase in demand will not be able to increase the price of natural gas. The domestic demand has increased by 14 billion cubic feet per day (BCF/d) since 2017 and is expected to increase by an additional 3 BCF/d of liquefied natural gas (LNG) in 2020.

Natural gas production in the US has also grown by more than 14 BCF/d since January 2018 to more than 90 billion cubic feet per day in 2019 and 2020. Drillers are now able to increase supply faster than domestic or global markets can consume it. Nearly all the growth in U.S. natural gas demand over the next few years will come from LNG exported to other countries. The added supply from the Permian will match—if not exceed—those volumes.

The Henry Hub natural gas spot price averaged $2.22 per million British thermal units (MMBtu) in August, down 15 cents/MMBtu from July. Based on recent price movements and EIA’s assessment that natural gas production will be sufficient to meet expected demand and export levels at a lower price than previously forecasted, EIA lowered its Henry Hub spot price forecast for 2020 to an average of $2.55/MMBtu, 20 cents/MMBtu lower than the August forecast.

EIA forecasts that U.S. dry natural gas production will average 91.4 billion cubic feet per day (Bcf/d) in 2019, up 8.0 Bcf/d from 2018. EIA expects monthly average natural gas production to grow in late 2019 and then decline slightly during the first quarter of 2020 as the lagged effect of low prices in the second half of 2019 reduces natural gas-directed drilling. However, EIA forecasts that growth will resume in the second quarter of 2020. 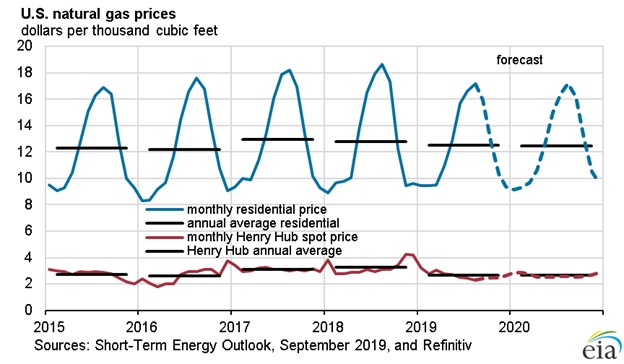 World liquids production is anticipated to match demand over the next 16 months. 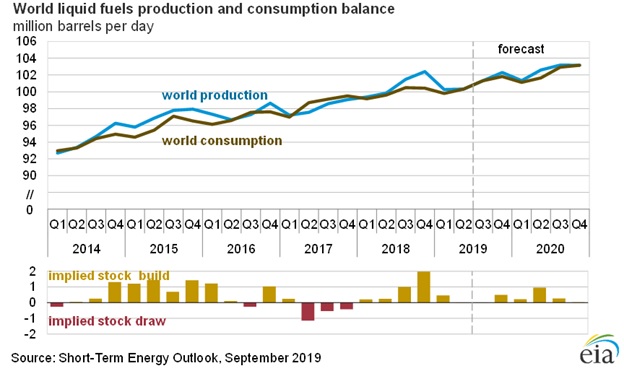 WTI crude prices are likely to hover in the $50-60/barrel range throughout the next 16 months.   The drone strike on the Saudi facilities could cause price increases. However, the amount which would be made available from reserves could mitigate any price rise. 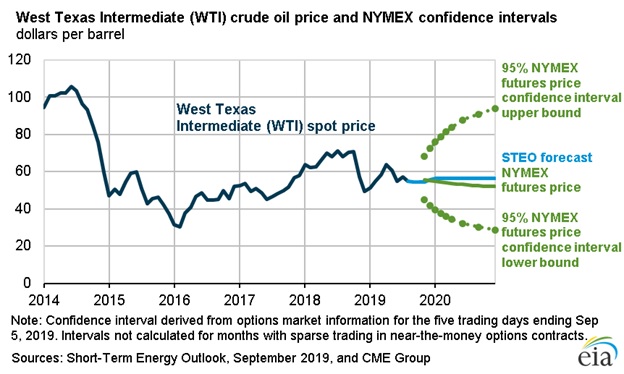 Gas must be liquefied in order to be an international commodity.

The U.S needs to accelerate LNG plant construction to take advantage of the low cost gas and to compensate for production problems caused by political activities in the Middle East.

U.S. exports of liquefied natural gas (LNG) have been growing steadily and reached 4.7 billion cubic feet per day (Bcf/d) in May 2019. This year, the United States became the world’s third-largest LNG exporter, averaging 4.2 Bcf/d in the first five months of the year, exceeding Malaysia’s LNG exports of 3.6 Bcf/d during the same period. The United States is expected to remain the third-largest LNG exporter in the world, behind Australia and Qatar, in 2019–20.

By 2021, six U.S. liquefaction projects are expected to be fully operational. Another two new U.S. liquefaction projects (Golden Pass in Texas and Calcasieu Pass in Louisiana) that started construction this year are expected to come online by 2025. By that time, EIA projects that the United States will have the world’s largest LNG export capacity, surpassing both Qatar and Australia.

CFT suppliers have the opportunity to substantially increase their revenues with the proper pursuit of the international opportunities. A larger percentage of the fuel demand will be met with products which require up to 10 x the investment in CFT products and services. So a fuel demand growing at 3percent can result in a CFT market growing at a CAGR of 10 percent. On the other hand the political factors make any projection uncertain.

There is a big opportunity for CFT suppliers to be technology leaders. This includes components which can withstand the erosive and corrosive and extreme physical conditions occurring in hydraulic fracturing, LNG, gas to liquids, coal to gas and liquids. New opportunities such as solving the fracturing challenges in Argentina and China and extracting rare earths from syn gas can pay big dividends. Manufacturing fracturing sands from low quality Texas sources has been achieved only with the ingenuity of the CFT industry. Where would the U.S. be if its citizens had not developed hydraulic fracturing and the country was paying $150/bbl for oil?