Revenues for suppliers of cleanroom hardware and consumables will exceed $10.3 billion in 2011. This is the latest forecast in the McIlvaine continuously updated Cleanroom World Markets report. www.mcilvainecompany.com. The hardware revenues will be smaller than the consumables. 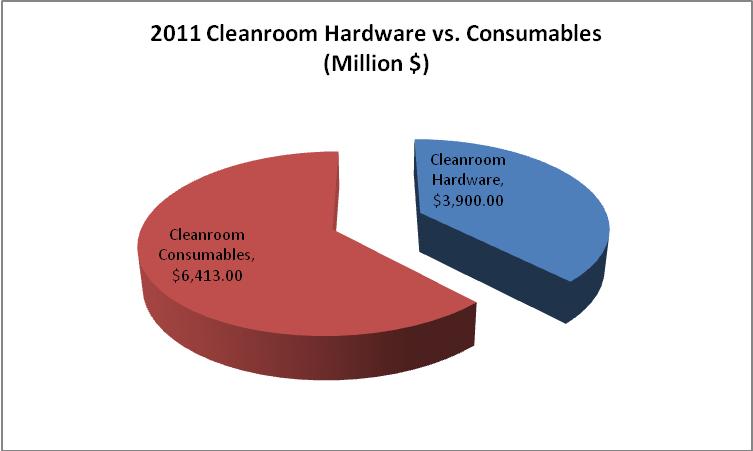 Consumables revenues are steadily increasing, but hardware revenues follow the same peaks and valleys as do semiconductor, flat panel and medical device equipment revenues. The pharmaceutical industry is the one major hardware purchaser which steadily increases purchases.

Gloves are the single biggest consumable purchase.  Wipes are the second. Reusable and disposable garments are equal in revenues but not in unit sales. Far more disposable garments are purchased. There are many unique products manufactured for cleanroom operators and combined in the supplies category. They include disinfection and cleaning chemicals, mops, and even specially made pens suitable for cleanroom use. 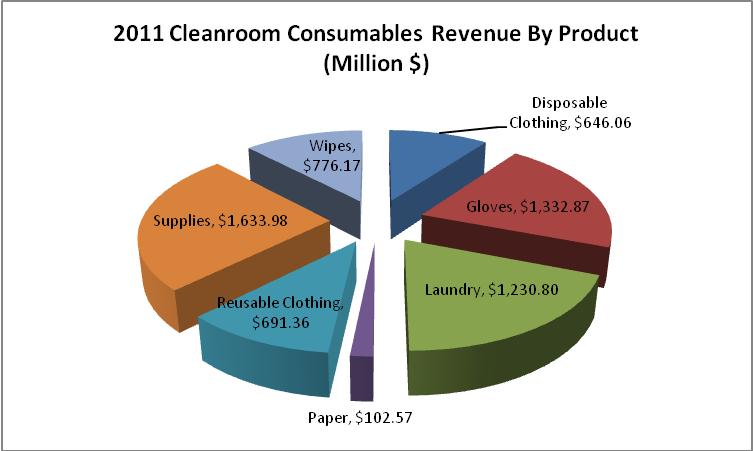 Asia is both the largest and fastest growing region for both hardware and consumables. Nearly all the flat panel display cleanrooms are in Asia. China is the fastest growing semiconductor producer. The U.S. has managed to stay ahead of Europe thanks to its early innovations which created much of the electronic industry. 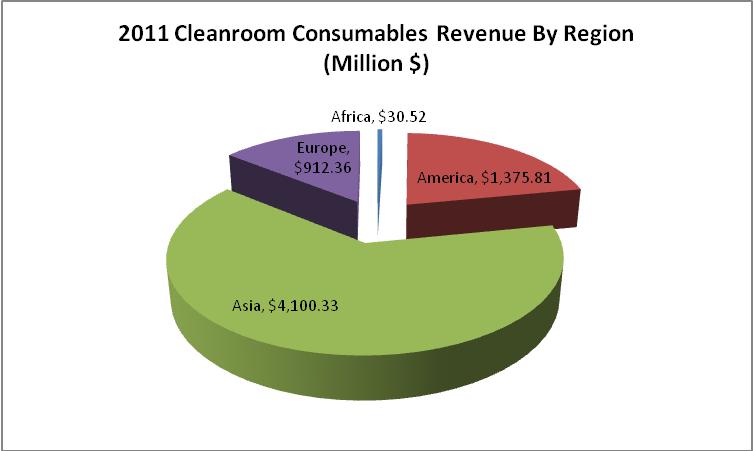 The one area where Europe is a leader is in pharmaceuticals. The European pharmaceutical industry is a significant purchaser of cleanroom consumables ($220 million). This is greater than Asia, but less than the Americas. Europe is the leading center of technology development. Many universities are devoting research to the subject. There are a number of publications devoted to the subject of cleanrooms.  There are more than 50 conferences and exhibitions in Europe each year where there are significant numbers of cleanroom displays.

McIlvaine believes that future product selection and, therefore, market shares for specific suppliers will be substantially influenced by a concept known as “Knowledge Based Sales”. Cleanroom consumable purchasers tend to buy the lowest first cost product rather than the one with the lowest life cycle cost. If the knowledge level of the needs and the solutions is raised for both purchaser and supplier, then the best rather than cheapest product will be used.

McIlvaine has raised the knowledge level in the worldwide air pollution control industry.  McIlvaine is now initiating that effort in the cleanroom market starting with garment decisions in Europe.  By working with European cleanroom operators, laundries, distributors, garment manufacturers, validators and consultants and posting information to a free site.  It has also enlisted two world experts in this quest.  Dr. Hans Schicht is well known thorough the cleanroom world and has particular expertise in European pharmaceutical cleanrooms.  C.W. Berndt is an expert in garments and processing and is a past president of IEST.

One significant early achievement is to clarify the methodology for determining the environmental impact of single use as iscussions are underway in terms of viewing the cleanroom classifications in a much more sophisticated manner.  Typically the hardware configuration has been utilized to determine whether a room was likely to be classified as Class 100 or Class 1000 (number of particles in a cubic ft. of air). But European research shows that people are the particle generators.  New concepts such as motion intensity along with the more obvious factors such as numbers of workers/100 m2 and outer and under garments are needed to evaluate the likely cleanliness of a specific room.

From an international perspective there are many initiatives.  “Decisive Classification” will provide the structure and definition of cleanroom terms in many languages. McIlvaine is working with the Chinese and American Filtration Societies and will be working with many others in this effort.  Another initiative is to identify every financial entity with a corporate number and provide the name in both Latin and Mandarin characters.

More information on the services mentioned in this analysis is found at: