Coal-fired power plant operators will complete investments of $8.8 billion for flue gas desulfurization (FGD) systems starting operation in 2011. The investment in 2012 will be down and will bounce back in 2013. These are the latest forecasts in FGD: World Markets, an online publication of the McIlvaine Company.

These revenue forecasts reflect only the amounts paid for new systems. They do not reflect consumables, repairs and upgrades of existing systems.  When this segment of the market is included, the size nearly doubles to $17 billion.  While the new system market fluctuates from year-to-year, the total market is showing a steady increase as more desulfurization units are put into operation.  It should be noted that these forecasts do not reflect the revenues booked by the suppliers.  Suppliers start reporting sales several years prior to the final start up and often report the final 10 percent of sales after commissioning and approval. 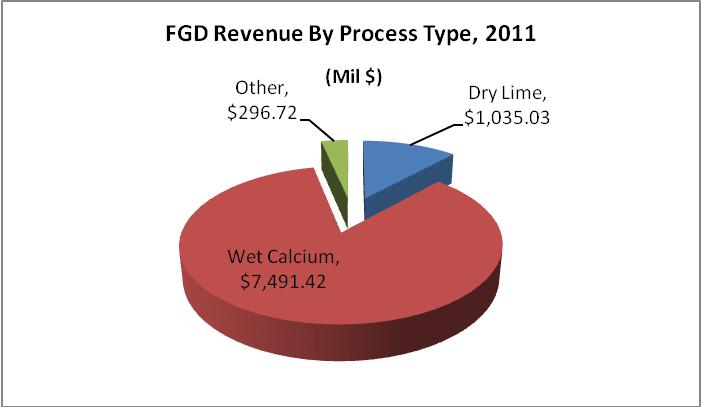 Wet calcium systems account for the large majority of the units. These units use either limestone or lime and produce calcium sulfate or gypsum.  If an additional oxidizing step is incorporated, the gypsum is suitable for wallboard. In fact, in Europe most wallboard is produced from FGD gypsum.

The dry systems are segmented into spray driers and circulating dry scrubbers (CDS). The CDS systems are carving out a larger market share due to the ability to handle coals with higher sulfur levels.

There are many opportunities to utilize “other" technologies.  Several technologies produce sulfuric acid and sulfur. Ammonium sulfate fertilizer can be economically produced if the coal-fired power plant is appropriately located. Hydrochloric acid can be produced along with wallboard quality gypsum. 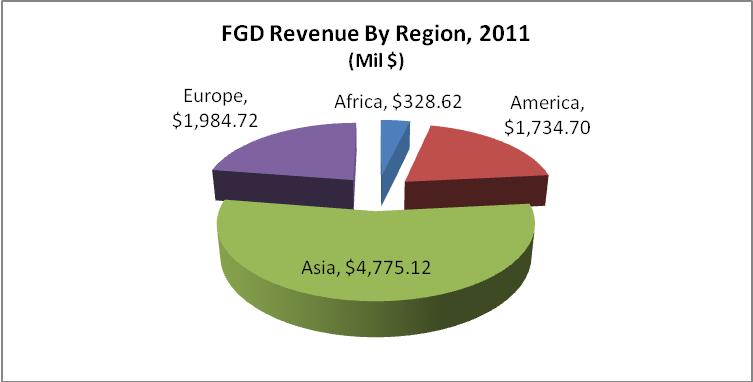 The big growth market is in Asia.  China will continue to be the largest purchaser of FGD systems but the big retrofit and new boiler surge is at least temporarily over.  So the market will remain large but flat.  India has the biggest growth potential. The repair and retrofit market is very significant in Japan, Taiwan and South Korea.

U.S., European and Japanese suppliers of systems compete globally. Many are divisions of boiler companies and are capable of providing complete generation plants.  A number of Chinese companies who have functioned as licensees are flexing their muscles and will be contending in the international market in the future.

For more information on FGD World Markets, click on: http://www.mcilvainecompany.com/brochures/air.html#N027