1000s of Municipal Drinking Water Projects are Underway in the U.S. and Canada

Municipal drinking water plants in the U.S and Canada have thousands of projects underway to meet the huge needs for more and better municipal drinking water.  Each of these projects is being tracked from inception through operation in North American Public Water Plants and People.  Large cities in the U.S. with over 100,000 populations are attempting to meet investment needs of $5 billion/yr whereas medium sized communities have an even larger task. 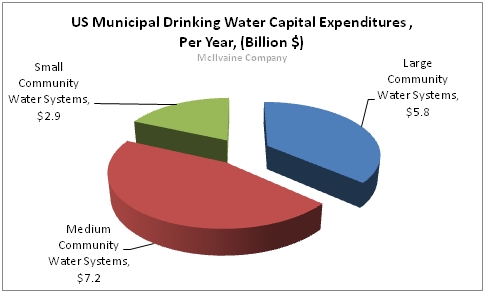 Treatment requirements are 22 percent of the total investment. These include new plants, expansion of existing plants, replacement of obsolete systems and upgrading the plants to meet new regulatory requirements. 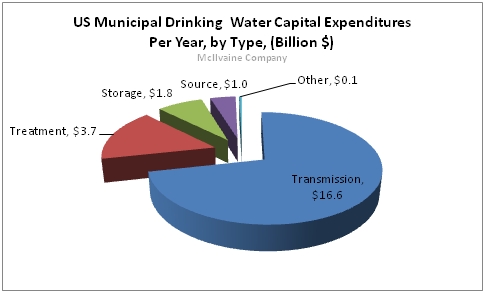 A typical project is one under discussion in Woonsocket Rhode Island.

The city is under state and federal mandates to upgrade the Manville Road Water Treatment plant by March 2013 to eliminate the discharge of filtration pollutants into the Blackstone River and improve the quality of drinking water.

Engineers from Camp Dresser McKee have proposed a $55 million plan that includes dismantling the existing plant and replacing it — at least for a time — with a pipeline allowing the city to buy drinking water from Pawtucket.  The city would build a new water treatment plant on the site of the existing one perhaps two years later.

The alternative is to build a new plant just over the city line in North Smithfield. The latter option comes with a slightly lower price tag — about $50 million — but it does not include what the city will end up paying in property taxes to North Smithfield.

Some of the states with the largest project activity are those with growing populations.  California has annual project investment needs of $380 million. 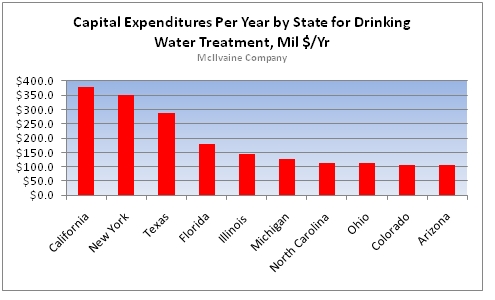 The needs in Canada are substantial despite the much smaller population. Decades of cuts in infrastructure funding have resulted in a “municipal infrastructure deficit” conservatively estimated at $123 billion by the Federation of Canadian Municipalities. Communities across the country are in desperate need of money to pay for water pipes and filtration systems, which is now the responsibility of municipal governments. Some governments have started looking to private investors to rebuild infrastructure through public/private partnerships.

Regina Saskatechewan will need a capital investment of about $69 million in water and wastewater treatment this year. "Over five years, the city estimates an investment of $344 million and over 20 years, just under $1.2 billion.”

The Government of Canada announced the approval of 42 low-cost infrastructure loans for more than $192 million to 11 different municipalities throughout the Province of Ontario as part of Canada's Economic Action Plan.