Investment in ultrapure water systems and consumables will be just under $4 billion in 2011 and will rise to $4.4 billion in 2012. This is the latest forecast in Ultrapure Water World Markets, a continually updated online report by the McIlvaine Company.

The electronics industry is booming and, as a result, will still invest just under $1.5 billion in ultrapure water this year. 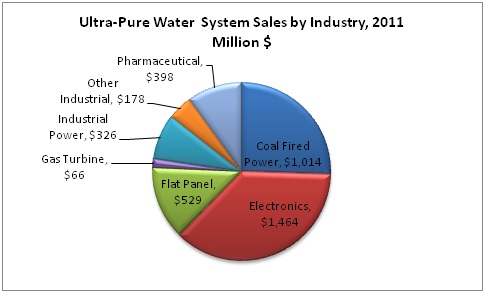 The power industry in Asia is also very active. This will contribute to a billion dollar ultrapure water investment by coal-fired, nuclear and gas turbine power plants. Power also includes the relatively new solar–steam technology. The pharmaceutical industry will continue its steady growth with an investment of just under $400 million.

Sales of condensate polishing systems will exceed $400 million in 2011. Some individual retrofit projects exceed $4 million in value. The investment in instrumentation and controls will be equal to that in the polishing systems. Very high quality instrumentation is required. For example, dissolved oxygen monitors have to be accurate in measuring at levels of a few parts per billion.

Sales of reverse osmosis systems for ultrapure water will exceed $300 million. Replacement membranes and resins will generate revenues even larger than for the new equipment. Treatment chemicals are necessary to aid in purification and protect the equipment.

Asia will account for a large percentage of the total investment.  New coal-fired power plants and semiconductor fabrication facilities are boosting the Asian market.  Europe and the U.S. continue to lead in the pharmaceutical sector. The flat panel display segment is all in Asia.