Asia will boost world valve sales to just under $51 billion in 2011. This is the latest forecast in the continually updated online Industrial Valves: World Markets published by the McIlvaine Company.

Asia will account for 40 percent of the total purchases compared to 29 percent for the Americas. 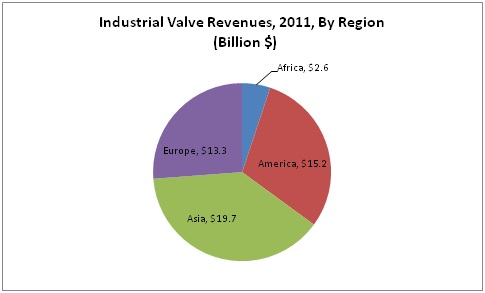 The oil and gas industry will be the biggest purchaser. There is substantial growth in unconventional fuels including gas shale, tar sands and even gas-to-liquids. Direct liquefaction of coal in the U.S. and China promises to be one of the unanticipated hot markets. The turbulence in the Middle East, the Japanese nuclear meltdown and breakthroughs in commercializing direct liquefaction will be a big incentive to move forward.

The power industry is the second largest segment.  Coal-fired power generators will purchase more valves than the rest of the power industry combined.  The nuclear problems will boost combined cycle natural gas plant sales in the short term but longer term will have more impact on coal.

There are five major types of valves that comprise most of the market. 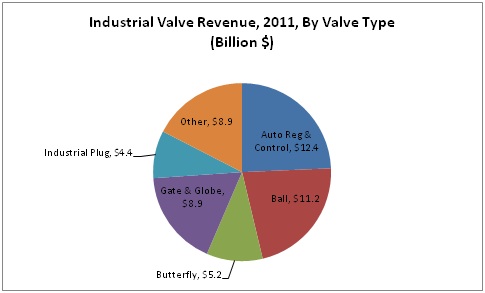 The valve sizes and materials cover the spectrum. There are the big subsea valves which weigh tons and were involved in the recent gulf coast oil spill. There are small finger nail sized valves used in fluid power.