World Will Invest $1.2 Trillion in New Coal Generators But Only $730 Billion in Nuclear and Gas Power in Next Decade

There has been a sudden reversal in the trend away from coal.  The nuclear disaster in Japan coupled with new evidence that gas-fired generators will emit more greenhouse gases than new coal generators are influencing the plans of electric generating companies around the world.  Of the $1.9 trillion now planned for new fossil and nuclear power in 2011-20 period 62 percent will be coal based. This is the new forecast in Fossil and Nuclear Power Generation, a continuously updated report published by the McIlvaine Company. 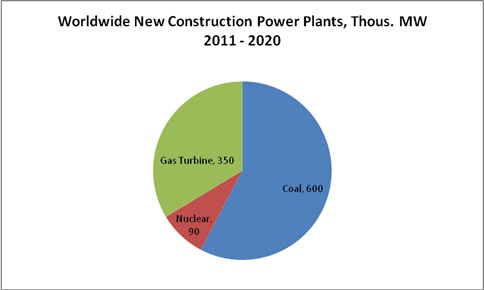 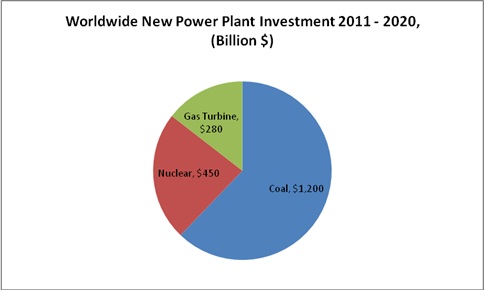 Replacing old coal power plants with new coal power plants will have very large environmental benefits while not increasing the cost of electricity. These new plants built prior to 2020 can then be replaced in 2045 with whatever is the best choice at that time. Solar and wind are likely to be competitive by that date.  Nuclear could be viewed as safer than it is today.  Coal with CO2 sequestration may also be an option, but not in the near term.

The nuclear problems in Japan create safety and health concerns as well as financial uncertainty.  The costs of future power plants are likely to rise. New arrangements have to be made for spent fuel rods. The sitting problem for any individual project will be come much larger.  Some countries have already announced changes in their nuclear plans.

Recent very detailed studies have revealed that the methane emissions from conventional gas are much higher than previously believed.  Shale gas has even higher methane emissions.  Since the U.S. will be primarily relying on shale gas by 2020 this will be a high greenhouse gas option.

The perception of coal as “dirty” is based on the ancient fleet operated by the U.S.  The best way to view the alternatives from an environmental perspective is to convert all pollutants to “tons of CO2 equivalent.”  A ton of methane is equal to 29 tons of CO2 due to its more potent greenhouse effect.  Nitrogen oxides, sulfur oxides, particulate, mercury and other toxics emitted to the air and water can also be expressed in tons of CO2 equivalent.

Another factor to be considered is indirect energy use and consequent CO2 implications.  The energy used to explore, extract and purify shale gas is higher than that needed for conventional gas.  In fact, most new gas will come from sources which require higher amounts of indirect energy. This indirect use can also be expressed in “tons of CO equivalent” 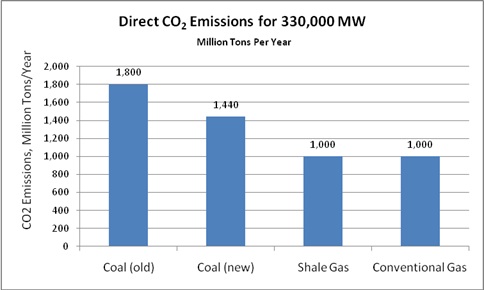 Old coal power plants are also large emitters of a wide range of pollutants to air and water. But new coal power plants with efficient air pollution control systems and zero liquid discharge are low emitters.  Because of the methane emissions both conventional gas and shale gas are relatively large emitters of pollutants when the common metric of “tons of CO2 equivalent” is utilized. 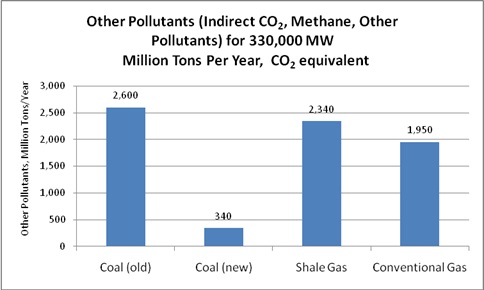 When the direct and indirect emissions are compared based on the common metric it is clear than new coal power plants are the best fossil option. 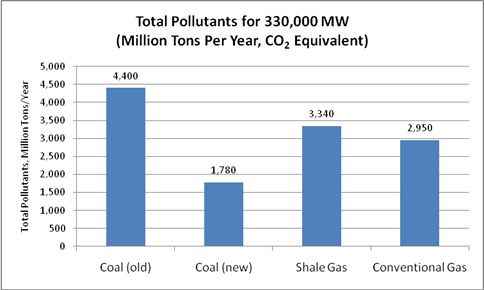 The biggest driver for coal will be its low cost compared to alternatives. The EIA is projecting that large quantities of shale gas will be utilized in the U.S. But because of the shrinkage in conventional gas production, the U.S. will remain a net importer of gas for the next several decades. Because gas can be converted to liquids or substituted for liquid products there has been an historic ratio of oil to gas prices. Since oil is likely to remain above $100/barrel gas prices will rise appreciably in the coming years.

The power industry is potentially a consumer of more gas than is used by all other sources combined.  The EIA forecast that gas will only be utilized for 25 percent of power generation in the coming decades is based on the reality that demand drives prices.

The world investment of $ 1.2 trillion for new coal-fired power plants will act as a big economic stimulus. Because these plants use 30 percent less coal than existing plants the cost of electricity will be lower than that from existing coal plants with retrofits of expensive air pollution control equipment.