There are more than 40,000 municipal plants purifying the drinking water for residents in Canada and the U.S. Each of them buys an average of 10 different types of chemicals yearly. Often there are dozens of bidders.  This results in millions of individual bids per year by approximately 100 suppliers of these chemicals. McIlvaine tracks the activities at individual plants including expansions, equipment replacements and chemical purchases in North American Public Water Plants and People (an online service with biweekly updates).  Chemicals include activated carbon, chlorine, ferric chloride, lime and many others.

The selection of chemicals is now influenced by the necessity of meeting Trihalomethanes limits. Chlorine dioxide is not a chlorinating agent and can be used as a primary disinfectant or as a raw water oxidant, for THM and HAA precursor reduction in potable water treatment systems.  It can also be a quick option for utilities struggling with compliance issues.

Chemicals are also used for filtration and separation processes occurring at the plant. Coagulants/flocculants include iron hydroxide, aluminum hydroxide and synthetic polymers.

In terms of annual tonnage, lime ranks first among chemicals used in the treatment of potable and industrial water supplies. Lime is used by many municipalities to improve water quality, especially for water softening and arsenic removal. 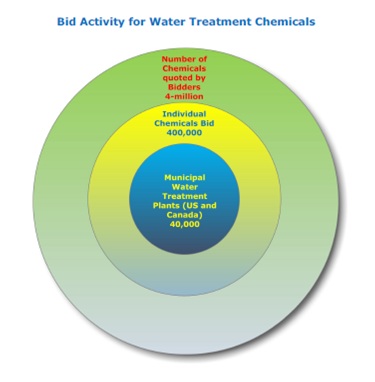 Softening - In water softening, hydrated lime is used to remove carbonate hardness from the water. Hardness caused by other calcium and magnesium salts, called noncarbonate hardness, is generally treated by means of the lime-soda process, which entails the precipitation of magnesium by lime. The co-produced calcium salt reacts with the soda ash to form a calcium carbonate precipitate. Lime enhanced softening can also be used to remove arsenic from water. Recent changes to the national drinking water standard for arsenic have increased the need for this treatment.

pH Adjustment/Coagulation - Hydrated lime is widely used to adjust the pH of water to prepare it for further treatment. Lime is also used to combat "red water" by neutralizing the acid water, thereby reducing corrosion of pipes and mains from acid waters. The corrosive waters contain excessive amounts of carbon dioxide. Lime precipitates the CO2 to form calcium carbonate, which provides a protective coating on the inside of water mains.

Lime is used in conjunction with alum or iron salts for coagulating suspended solids incident to the removal of turbidity from "raw" water. It serves to maintain the proper pH for most satisfactory coagulation conditions. In some water treatment plants, alum sludge is treated with lime to facilitate sludge thickening on pressure filters.

Effect on Pathogen Growth - By raising the pH of water to 10.5-11 through the addition of lime and retaining the water in contact with lime for 24-72 hours, lime controls the environment required for the growth of bacteria and certain viruses. This application of lime is utilized where "phenolic water" exists, because chlorine treatment tends to produce unpalatable water due to the phenol present. This process, called "excess alkalinity treatment," also removes most heavy metals.

Removal of Impurities - One of the most common methods of removing silica from water is the use of dolomitic lime. The magnesium component of this lime is the active constituent in silica removal. Lime is also used to remove manganese, fluoride, organic tannins and iron from water supplies.

Typically purchases are made for a 12 month period.  Some municipalities such as Chicago contract for as long as five years to minimize cost.  Bids are generally open to any bidder who can qualify.  There are specific requirements as to method of packaging e.g. bags vs. truckloads. There are also specifications as to whether the chemicals are to be furnished in a dry or liquid form.  Specifications can be very specific. For example, granular activated carbon specifications can limit the origin e.g. lignite or bituminous coal, the particle size and other characteristics.

The small utilities may only spend a few thousand dollars per year for a particular chemical, but the large utilities can spend millions of dollars. Canadian plants purchase approximately 10 percent of the total with plants in the U.S. purchasing the remainder.