Cleanroom Hardware Sales Will Be $3.8 Billion This Year But Up $1 Billion In 2015

Sales of cleanroom hardware including rooms and all the components will be just under $3.9 billion in 2011 but will jump to $4.9 billion in 2015.  This is the latest forecast in World Cleanroom Markets, a continually updated report published by the McIlvaine Company. 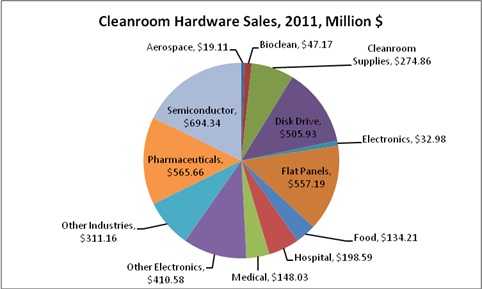 Semiconductor wafer fabrication plant construction spending will be down slightly, but equipment spending will be up 28 percent over last year.  The present level is 300 percent higher than it was a few years ago.  Sales of cleanroom hardware this year will be just under $700 million.  Asia is where most of the activity is taking place.  Hardware sales in Asia will account for 71 percent of the total purchases.

Hospitals represent one of the biggest growth potentials. Few hospital operating rooms are equipped with laminar flow technology. There is also a need for cleanroom technology for isolating patients who are potential disease communicators or are particularly vulnerable.

Cleanroom hardware is designed to meet various levels of cleanliness.  The most efficient rooms inject air through a ceiling completely filled with HEPA filters.  The walls must be furnished in special materials.  Perforated floors allow the laminar downward flowing air to leave the room and then be recirculated.  Within the room there are likely to be additional miniature cleanrooms with descriptors such as biological safety cabinets, mini-environments or clean benches.

For more information on:  World Cleanroom Markets, click on: http://www.mcilvainecompany.com/brochures/cleanroom.html