Cement Plants to Spend $2.6 Billion/yr for Air Pollution Control over the Next 3 Years

The new cement hazardous air pollution rules will boost the market for air pollution control in the U.S.  But the infrastructure growth in the developing world will have a great impact on the market. This is the conclusion reached by the McIlvaine Company www.mcilvainecompany.com  by aggregating the projections in 5 of its on line market reports.

The U.S. market will be smaller than the Chinese market in the period despite the boost from the new U.S. rules. 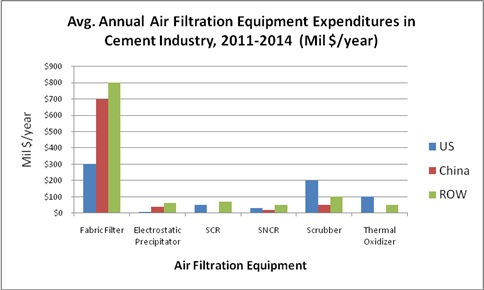 The U.S. will lead in purchases of scrubbers and thermal oxidizers but fabric filters will be the largest equipment category. 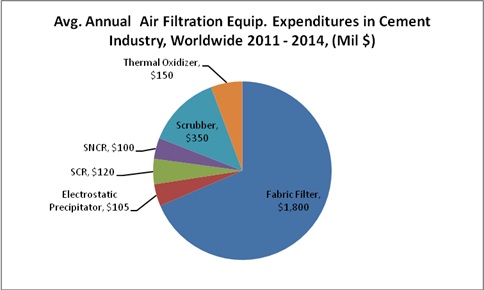 The cement plants around the world are increasingly utilizing fabric filters for cleaning the gas from the kilns. Formerly electrostatic precipitators were used for this application. For many years fabric filters have been used for coal grinding and material transfer points.  FLSmidth, KHD, and other large cement plant suppliers are frequently furnishing fabric filters as an integral part of new plants they are building whether it is a developed or a developing country.

SO2 is of increasing concern in the U.S. and Europe.  Wet limestone scrubbers will be a popular choice in the U.S. they will also remove the HCl to the levels required in the new cement MACT rule  Relative to NOx control  selective non-catalytic reduction will be the most popular choice. However, the equipment cost is low. The big cost is in the urea or ammonia injection.

Kerogen (organic chemical compounds) in the limestone calcined to make cement are vaporized and form toxic organic air pollutants. EPA expects many plants to install thermal oxidizers to destroy these emissions.  However, it is also likely that some plants will be able to make sufficient reductions using activated carbon injection. Nevertheless the U.S. market for thermal oxidizers for this application will average $100 million/yr.

For more information on: