Markets for Centrifuges, Clarifiers, and Separators to reach $6.4 Billion this Year Thanks to the Unconventional Fuels Segment

The sales of sedimentation and centrifugation equipment will reach $6.4 billion this year with major contributions from the unconventional fuels segment. The infrastructure demand in Asia is the second biggest driver. These are conclusions reached by the McIlvaine Company in its online Sedimentation/Centrifugation World Markets report. 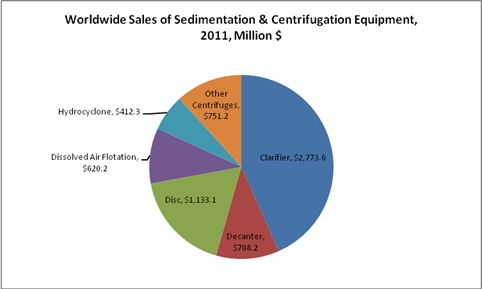 A number of companies are supplying clarifiers and thickeners to separate flow back water and solids in the Marcellus shale region of PA. The water used to fracture the shale has very high levels of solids, so liquid solid separation is one of the most important processes. Ovivio (formerly Eimco) is the largest supplier of clarifiers.

Centrifuges made by Pieralisi, Alfa Laval, Westfalia and others are used for oil slops treatment, drilling mud, sludge oil treatment and dewatering of solids from shale flow back water. A movie star promoted decanter centrifuge received lots of publicity at the time of the Gulf oil spill.

Disc centrifuges are efficient liquid/liquid separators and are used in the beverage and chemical industry as well as to purify fuels.

Asia is buying record numbers of decanter centrifuges from Andritz and other suppliers to dewater sewage sludge. This large market is caused by the rural to urban migration and the lack of past investment. Centrifuges are preferred over belt filter presses for the largest municipal plants.

Dissolved air flotation (DAF) is also used to separate solids from drinking water and municipal wastewater.Suppliers include Degremont and Komline-Sanderson. Ecolab purchased Krofta to become one of the largest suppliers of DAF systems.

Hydrocyclones find use to separate larger particles prior to centrifuges or filters. They are used extensively to separate gypsum from the slurries in flue gas desulfurization systems in the power industry.  The mining industry is a big purchaser as well.

Sedimentation and centrifugation equipment is necessary for infrastructure growth. Municipal water and wastewater treatment, steel production, mining, basic chemicals, refining, and processed food all utilize this equipment. As a result, the market in Asia and the developing world is growing faster than in the developed countries.

For more information on Sedimentation/Centrifugation World Markets, click on: http://www.mcilvainecompany.com/brochures/water.html#n005