East Asia will be the biggest market in 2012 for scrubbers, adsorbers, absorbers and biofilters.  Revenues will exceed $2.2 billion according to the McIlvaine Company in its continually updated Scrubber /Adsorber World Markets. 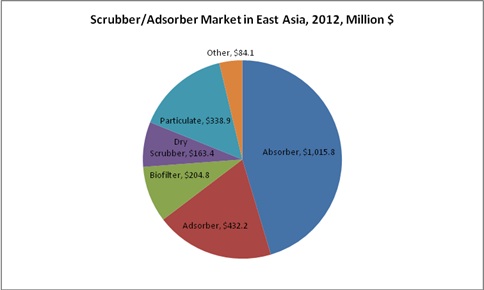 Absorbers will constitute the largest segment with revenues of over $1 billion. These devices are used to capture acid gases such as SO2, HF, and HCl. Applications include incinerators, steel mills, municipal wastewater plants, chemical plants, refineries and many other industries.  (Absorbers for power plants are included in a separate report.)  Asia is rapidly expanding its basic industries which are the major purchasers of absorbers.

Adsorbers and biofilters are used to remove H2S and volatile organic compounds. They are also used for odor control in food plants and municipal wastewater treatment facilities. Absorbers are widely used in the chemical and petroleum refinery industries.

Dry scrubbers remove acid gases such as HCl. A big application in East Asia is municipal waste incineration. The cement industry is a new market. A recent contract for a new cement plant in East Asia included dry scrubbers to remove the SO2 and HCl.

For more information on Scrubber/Adsorber/Biofilter World Markets, click on: