It may seem counterintuitive but the best way to reduce CO2 is to build lots of ultrasupercritcal coal power plants now and then retire them in 2050. This is the conclusion reached by the McIlvaine Company in its Fossil & Nuclear Power Generation: World Analysis & Forecast.  This conclusion is based on the following factors:

The recommended program results in a slight rise in CO2 emissions by 2030, but a dramatic reduction in 2050 and potentially the elimination of coal as a power source by 2070. 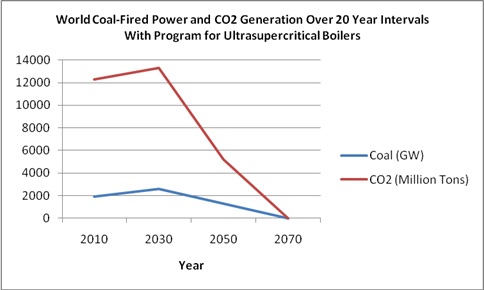 Coal-fired capacity would rise by 700 GW in the next 20 years, but 1200 GW of ultrasupercriticals would replace old subcritical boilers. As a result, the CO2 emissions per MW would drop by 24 percent. The trillions in investment in the replacement coal-fired power plants would greatly stimulate the world economy without financial penalty due to the low operating costs of the new units.

The recent decisions by Germany and other countries to place less emphasis on nuclear power have dictated a new strategy regardless of views relative to the environment. Under this scenario, the share of power generation from coal will only be 35 percent in 2030.  In any case,  a very ambitious program in renewable and gas will be needed.

Recent concerns about the economics and environmental hazards with shale gas also dictate a conservative plan relative to the use of this source for power generation.

Some environmentalists will argue that 2050 is too late to make major CO2 reductions.  The thesis is that some cataclysm can occur in the meantime.  However, the recent revelations that the greenhouse warming potential of methane is much greater in the first 20 years would persuade one to steer clear of shale gas if one is trying to avoid a 2030 cataclysm.

The major hurdle for environmental acceptance will be some guarantee that coal-fired power plants built now will be retired 25 years after construction.  One option would be to set lifelong CO2 emission limits for any plant.  This would force the retirement at the desired time.