More than 150 companies are actively bidding 70 different chemical compounds to municipal water and wastewater utilities in Canada and the U.S.  The purchasers include 60,000 utilities in the U.S. and 6,000 in Canada.  These statistics were derived from three continually updated McIlvaine online services:  North American Public Drinking Water Plants and People, North America Municipal Wastewater Treatment Facilities and People and Water and Wastewater Chemicals, World Markets.

Most of the bids are for one year.  The most popular contract period is January-December and the second is July-June.  Some of the contracts are for two years and a few for five years.  Most utilities standardize on a schedule, so one can predict the next bid date based on the contract let for the current year.

Some chemicals which are classified as bulk are often treated as specialty chemicals.  One recent water utility rejected a bid for pebble lime of $120/ton based on previous problems with debris and purity. The winning bidder quoted $133/ton.  Other suppliers offered bids as high as $200/ton.  Some of the price variations are a function of distance between the production plant and the purchaser.

The difference in price per ton varies greatly from chemical to chemical as well as geographic location. 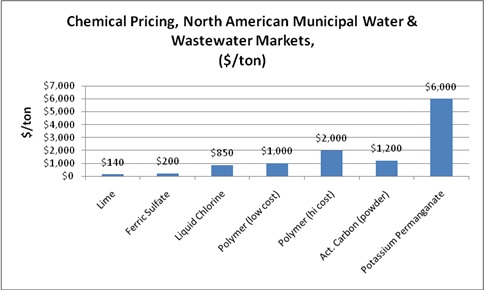 The price of a more expensive polymer at $2000/ton is 15 times higher than the cost of one form of lime.  But given different geographic locations and forms, lime can range from $100/ton to $200/ton. Potassium permanganate is more than 45 times higher priced than lime. 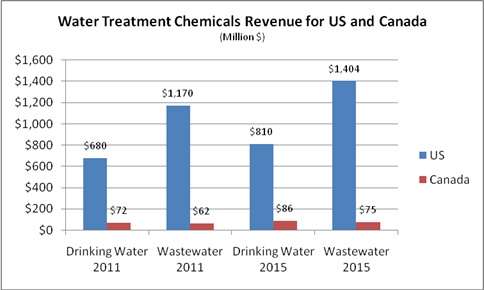 The wastewater chemical market will rise from $1.23 billion to $1.48 billion during the next four years.