The market for ultrapure water systems and consumables will exceed $3.8 billion this year thanks to activity in the semiconductor and power industries. This is the latest forecast in the continually updated Ultrapure Water: World Markets published by the McIlvaine Company.

This will be a record year for the sales of new semiconductor equipment as well as the ultrapure water systems which accompany them.  17 new major wafer fabrication facilities are slated for initial operation. These plants need to cleanse the chips at each processing step along the way. The water used for this purpose is subjected to the most efficient filtration and chemical treatment processes. 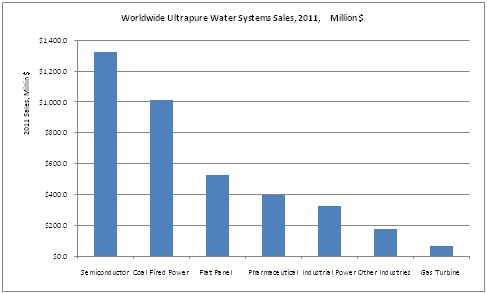 The 1.3 billion projected for the semiconductor segment includes cartridge and reverse osmosis filters, degasification, ion exchange systems, pumps and other equipment.  It also includes the piping and construction of the systems in the fab plants. Consumables such as chemicals are also included.

Coal-fired power plants are the second biggest market this year.  A number of new plants in Asia and upgrades and consumable expenditures elsewhere in the world will create $1 billion in revenues for the suppliers.  Most of the new Asian plants utilize the high temperatures and pressures associated with super critical operation. The purity of the water used in the steam cycle is even higher than with the older subcritical plants.

Pharmaceuticals are the fourth largest segment.  High purity water is required for fluids injected into the human body. This market is still dominated by the U.S. and then Europe.  This is in contrast to power and semiconductors where most of the market is in Asia.  The flat panel manufacturing is almost entirely in Asia.