The market for cross-flow membrane equipment and replacement membranes will rise 41 percent by 2015 in the Middle East compared to just 25 percent worldwide and 29 percent in East Asia. These are the latest forecasts in RO, UF, MF World Markets published by the McIlvaine Company. 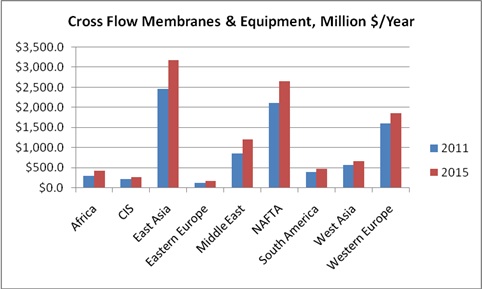 Despite its small population, the Middle East will account for 11 percent of all revenues. The reason is that desalination investments are soaring.  Israel, facing what could be the worst water crisis in its 63-year history, has launched a massive desalination project. The Finance Ministry has approved the construction and operation of a desalination plant in Soreq in southern Israel which will be the second largest plant in the world.  Many other Middle Eastern countries are also turning to desalination for drinking water for the population as well as for industrial uses.  Dow Chemical just announced that it will manufacture its FilmTec™ RO elements in Saudi Arabia.

Membranes are playing a growing role in purifying non-saline drinking water and municipal wastewater for reuse.  The use in the oil and gas industry is also expanding as hydro fracturing gains momentum.

BASF, one of the world’s largest chemical companies, has signed agreements which will position it to provide the optimum combination of chemicals and membranes.