Sedimentation & Centrifugation Market Will Grow in 2015

The world market for centrifuges, clarifiers, dissolved air flotation systems and hydrocyclones will grow from just over $6.3 billion in 2011 to $7.2 billion in 2015.  This is the forecast in the continually updated Sedimentation & Centrifugation World Markets. Clarifiers and thickeners will generate the most revenues.  These gravity-settling devices are widely used. They are found in every country from Chilean copper mines to Taiwanese sewage treatment plants.  The second largest equipment category is the disc centrifuge that is used as a dairy separator as well as a purifier of pharmaceuticals, wine and many other products.  Third on the list is the decanter centrifuge.  It dewaters sewage sludge and coal fines as well as food products. 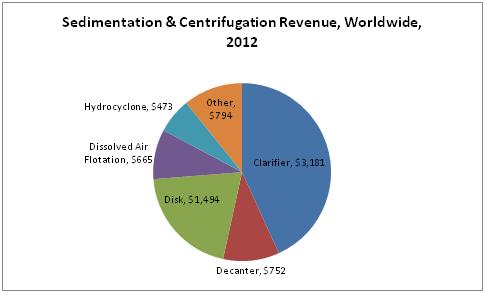 Fourth place belongs to the miscellaneous centrifuge segment.  Basket and pusher centrifuges are widely used in the chemical industry and are used in sugar and other food processing applications as well.  In fifth place is the dissolved air flotation (DAF) system. This device is replacing sand filters in municipal drinking water purification as well as cleaning wastewater in chicken processing plants and drive-in car washes.  Last on the list with just 13 percent of the market is the hydrocyclone which is used in minerals processing and power plant scrubber wastewater cleaning.

There are several hot markets for centrifuges. The oil and gas industry is one segment. The Gulf oil spill provided publicity but not much business. Ethanol is another up and down market. The U.S. and Brazil are the biggest producers.

Tar sands is a big and active market.  A number of multibillion dollar projects are underway in western Canada.  Disc centrifuges are used to process the bitumen froth and separate the water and sand from the product.

Alfa Laval is the leader in both the decanter and disc centrifuge category followed by GEA Westfalia who is second in both categories.  Because of the high speed and demanding manufacturing requirements, there is less Asian competition in centrifuges than in the other devices.  The centrifuge market is dominated by U.S., European and Japanese manufacturers.  In contrast, there are clarifier and DAF suppliers in virtually every country.

For more information on Sedimentation/Centrifugation World Markets, click on: http://www.mcilvainecompany.com/brochures/water.html#n005.