Industrial valve revenues will rise to nearly $65 billion in 2017 up from $51 billion this year. This prediction is included in the Industrial Valves: World Markets report published by the McIlvaine Company. 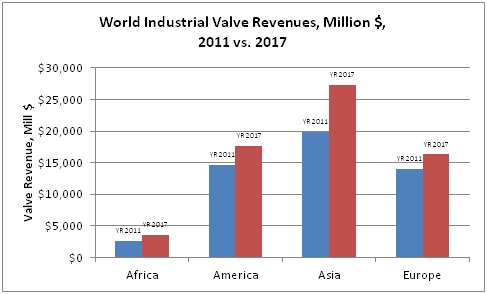 The big growth (nearly $8 billion) will occur in Asia which will enjoy a 27 percent increase over the period. Africa will lead all continents with a 37 percent increase. However, the growth will come from a small base. Europe will average less than 3 percent growth per year over the next six years.

The situation in the Americas mirrors that of Europe only with slightly higher numbers. U.S. valve manufacturers are gaining a strong foothold in the power, pharmaceutical, chemical and other high tech industries in Asia.

China is transitioning from a manufacturer of low technology valves to a range of high and medium technology products. The growth in the Chinese nuclear industry is spurring the development of high technology valves in this sector.  The large number of super critical coal-fired boilers under planning and construction is also a boon to the high tech valve manufacturers. China is a leader in construction of solar panel and semiconductor facilities. These facilities are purchasing large numbers of small but expensive valves.

Asia leads the world in construction of new municipal wastewater and drinking water plants.  These plants require a range of valve types and quality. In the U.S., the growth markets are shale gas and biofuels. The oil sands market in Canada is large and growing.

The industry continues to globalize.  For example: The Velan, Inc. German sales distribution subsidiary, Velan GmbH, has booked an order of more than US$20 million to supply valves to a Russian boiler manufacturer for three 660 megawatt units of the Barh supercritical coal-fired power plant in India. The customer in India is NTPC Limited (National Thermal Power Corporation), the largest state-owned power-generating company in India. So a North American company books an order through its German subsidiary for a Russian customer who will in turn install the valves in India.