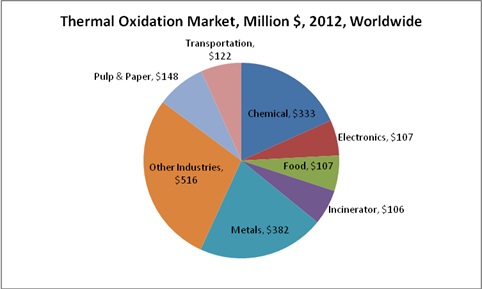 Applications are spread through many industries. Only seven industries will spend more than $100 million on these products next year. The other $516 million is spread across a range of applications from textiles to printing. The transportation sector includes only the oxidizers associated with manufacturing of transportation equipment such as automobiles and trucks.  It does not include the catalytic systems used on the vehicles themselves.

The semiconductor industry has very special needs for small oxidizers which treat very toxic fumes. Waste incinerators use thermal treatment systems to reduce dioxins. The cement industry is now a major potential market due to new air toxic rules.   The combustion of biomass for power generation is another growth market.

Asia is the leading purchaser.  The growth of the electronics, chemical and metal working industries in China is an important factor in the industry growth. The unconventional gas industry including gas shale is another driver.

The suppliers to this industry can be segregated based on their other products into three categories:

Eisenman, Durr and Megtec are involved in producing equipment and systems which generate volatile organic compounds, so the supply of the thermal treatment systems is an effort to help customers with a total solution.

Johnson Matthey, BASF, and others are primarily catalyst suppliers. However, in addition to the catalysts, they will furnish equipment design and support.

A third category, which includes companies such as Met-Pro, are those with a full array of air pollution control equipment. Thermal treatment is just one more category.  Often several types of air pollution control equipment will be utilized.  A carbon adsorber may concentrate the organics and make thermal oxidation more cost effective.  A scrubber may be needed to remove the sticky material before it reaches the catalyst.  An absorber may be needed to remove the acid gases.