The world’s supply of fossil energy is finite and must be utilized in the most economically and environmentally beneficial manner. This dictates construction of coal-fired power plants where enhanced oil recovery (EOR) provides a use for CO2.  In parallel gas which would otherwise be used for power generation in the EOR areas is converted to LNG and liquids and used in other regions.  Also in parallel large energy consuming industries expand in EOR areas such as the U.S. and Middle East/Africa.  This is the conclusion reached by the McIlvaine Company in its report, Fossil & Nuclear Power Generation: World Analysis & Forecast, click on:  http://www.mcilvainecompany.com/brochures/energy.html#n043.

Coal is one of the world’s most valuable energy resources. Over the next century it will all be consumed along with the remaining gas and oil. In the twenty second century, fossil fuels will not be available and we will have to solely depend on nuclear, solar, wind, biomass and other renewable resources.  In the meantime, we need to utilize the fossil resources most appropriately.

Each of the fossil fuel resources has unique uses and advantages. Here are the advantages of coal:

The potential to utilize coal most efficiently would result in:

The plan to make this happen must be global and take into account all the long-range environmental and economic consequences. There are a number of facts which are often overlooked but are important to the initiative:

It has been estimated that there are over 847 billion tons of proven coal reserves worldwide. This means that there is enough coal to last us around 118 years at current rates of production according to the World Coal Association. In contrast, proven oil and gas reserves are equivalent to around 46 and 59 years at current production levels.

The coal demand in Asian countries is soaring.  McIlvaine projects 2700 GW of coal-fired capacity in the world in 2017.  This could rise at 3%/yr to 3970 GW by 2030. At this rate, the world only has a eighty year supply of coal   Advanced Resources International estimates that there is the potential through enhanced oil recovery to create an additional 500 to 1000 billion barrels of oil and to store 320 billion metric tons of CO2 at the same time.. This storage would accommodate 4300 GW of coal-fired capacity for forty years.

The U.S. could store 34 billion tons of CO2.  Canada and Mexico could utilize and store another 9 billion tons.  This is enough to sequester all the coal-fired power CO2 generation for 25 years.

The biggest potential (125,000 billion tons) is in the Middle East and North Africa. The Asia –Pacific region would have a need for only 8 billion tons of CO2. 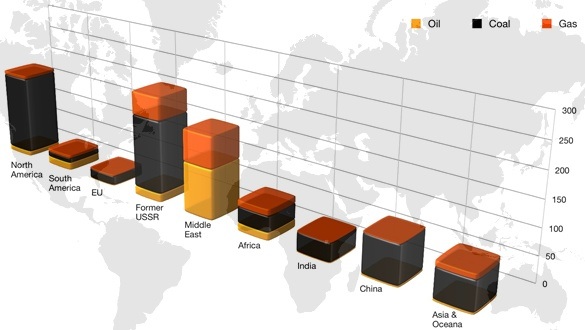 The World Energy Council estimates of proved recoverable reserves (hard coal and lignite) at end-2008 (Billion Metric Tons) such as the U.S. and Middle East/Africa.