The reality is that coal will remain a major fuel source for electricity generation for the next several decades. Coal generators will continue to be the leading source of CO2 emissions. Making these plants more efficient is the easiest way to reduce not only CO2 but all the pollutants. The cost and benefits of an efficiency improvement program are provided in the McIlvaine report, Fossil and Nuclear Power Generation: World Analysis and Forecast.

A new study from IEA released in July 2014, cites the Chinese example as the model. The Chinese are now anticipating an economic plant life of 25 years as opposed to 40 years used as the EU model and even longer in the U.S. China is replacing small old plants with new ultrasupercritical designs. These designs all have the latest air pollution control equipment. China realizes that technological improvements make existing plants obsolete after 2.5 decades. Who would argue that the economic life of an automobile is more than 25 years?

IEA points out that a 25-year economic life model completely changes the priorities for CO2 reduction in many countries of the world. This is particularly true for the U.S. which has the oldest coal fleet.

Since all sides benefit, there is every reason for agreement, fast track siting of new power plants and simultaneous retirement of old power plants.

The “Clean Power Plan” proposed by the Obama Administration seeks to achieve a 30 percent reduction in CO2 emissions from existing electric generating units by 2030 based on a 2005 baseline. States must show “meaningful progress” by 2020. With a strategy of coal-fired power plant replacement, this progress and compliance with the timelines will be assured.

The air pollution impact of upgrading the old fleet to supercritical efficiency would be a reduction equivalent to 2.4 billion tons of CO2. The validity of this calculation is easily determined by using the EPA cost justification values. CO2, various air toxics and each criteria pollutant is assigned a monetary value, so this creates a common metric. There are other environmental benefits. The upgraded coal-fired power plants would not generate the water and solid waste caused by the old power plants, so total environmental impact would be the equivalent of 5 billion tons of CO2. 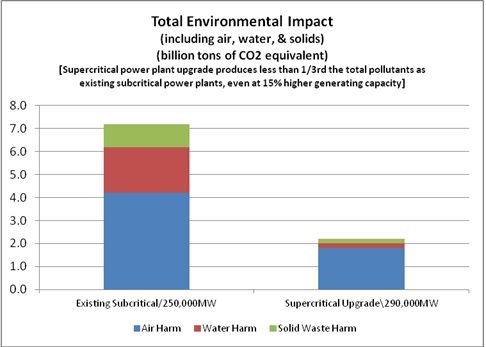