A Number of Gas Turbine Projects In Western Africa

Thanks to gas production in the region, there is now an affordable source of electricity in Western Africa. As a result a number of gas turbine projects are in planning and construction in the region.  These are reported in Gas Turbine and Combined Cycle Supplier Program published by the McIlvaine Company.

Only 30 percent of Sub-Saharan Africans have access to electricity. Planned and unplanned black-outs are common. The picture is improving in West Africa, but there is a long way to go.  Nigeria, which accounts for some 10 GW of the region’s total capacity, has a population of 173 million.  The U.S. has 100 times the electrical capacity with just twice as many residents.

There is a sharp divide between the better performing West African economies such as Ghana, Cote d’Ivoire and Nigeria where electrification rates range from 50 percent to 60 percent, and those such as Mali, Sierra Leone, Liberia and Guinea where rates range only to 15 percent to 20 percent penetration.  The recent Ebola outbreak has been attributed in part to the lack of electricity. 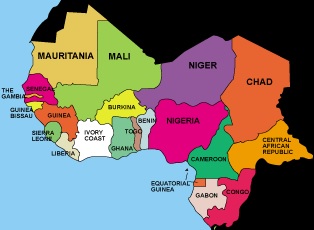 West Africa’s power production has risen by roughly 8 percent per year in the last few years and this rate of growth is expected to continue due to economic expansion in the region. In Nigeria, more than a dozen gas-fired power plants totaling 5,000 MW are in planning and construction.

Power supply is the number one priority for the 13 countries in the West African Power Pool (WAPP). They need to boost the supply of power, for political and security reasons, in addition to the societal and economic ones.

For more information on the Gas Turbine and Combined Cycle Supplier Program, click on: http://home.mcilvainecompany.com/index.php/markets/28-energy/610-59ei