By using the hydrogen chloride in coal, the rare earths contained in it can be extracted in what the McIlvaine Company believes to be simply the marriage of two proven systems.  This evaluation is contained in two McIlvaine publications, N043 Fossil and Nuclear Power Generation: World Analysis and Forecastand N027 FGD Market and Strategies.

The McIlvaine Company has been evaluating HCl scrubbers in coal-fired power plants. It has also been evaluating the economics of rare earth and metals recovery from the flyash produced by coal combustors and coal gasifiers. Using the two technologies in combination has not been previously addressed. However, McIlvaine concludes that they will unite in a perfect marriage which will reduce electricity costs, reduce environmental emissions and produce very valuable byproducts.

McIlvaine was involved in the original design of the HCl and SO2 scrubbing systems provided by United Engineers to Philadelphia Electric in the 1970s.  Since that date, a number of companies have designed and installed HCl scrubbing systems.  Systems at waste-to-energy plants in Germany start with a water scrubber which quickly absorbs HCl and allows the SO2 to pass through. The recirculated scrubbing liquid quickly reaches 30 percent hydrochloric acid.  This percentage is maintained with a bleed stream of acid which is then purified and sold.

McIlvaine began publishing a newsletter on coal gasification in 1979. In the intervening decades, hundreds of gasifier systems have been installed around the world. China has embarked on a program which would make coal gasification a main source of gas and liquid fuels.  There are several approaches to HCl removal.  The E gas system has a separate HCl scrubber. McIlvaine also suggests that the GE particulate scrubber could be run at low ph and produce hydrochloric acid.  So a two stage scrubbing system is already being used in the gasification process.

China is now mining flyash to recover large quantities of rare earth elements and metals. One of the leaching methods is with hydrochloric acid. Why buy hydrochloric acid when you can make it as part of the process?  The schematic below is a way to marry both processes. 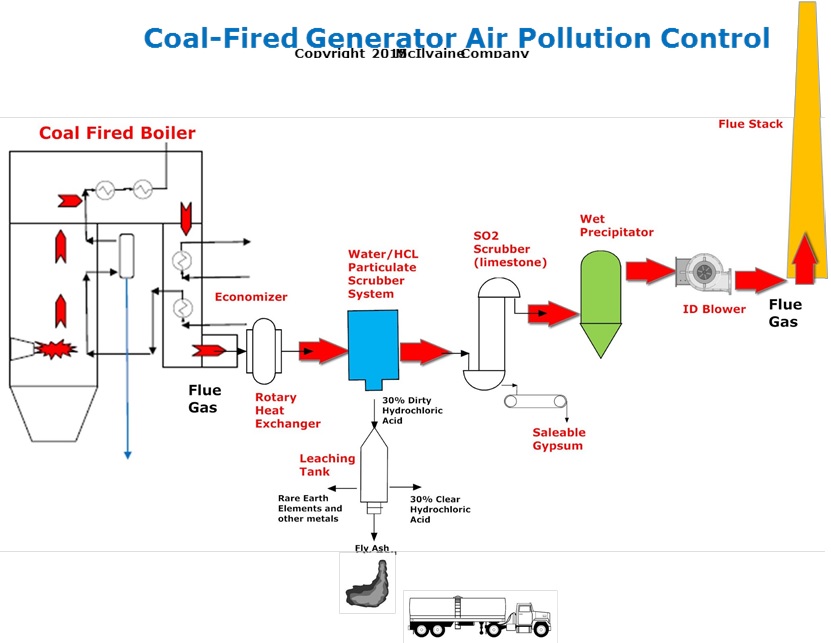 This schematic provides the mixing of HCl and flyash in a system which eliminates the first stage precipitator.  It is therefore attractive for old coal-fired power plants in the U.S. as well as for new coal-fired power plants in China. It does incorporate a wet precipitator.  Coincidently, this is the latest trend in China for other reasons (to meet tough new particulate standards).

Neumann Systems has a contract from DOE to extract REEs and metals in conjunction with a scrubbing system which it is installing at Colorado Springs Public Utilities. The proposed approach by McIlvaine differs by proposing that rather than buy acid, the power plant can make it.  The HCl content does not have to be high.  The first stage scrubber starts with water and then reaches equilibrium with 30 percent dirty acid. A portion is bled to maintain this percentage.

The advantages of using high chlorine coals would be that these coals are less expensive and the byproduct sales volume of acid will be higher.

With an EPA grant Physical Sciences, Inc. (PSI) and the University of Kentucky Center for Applied Energy Research (UK/CAER) investigated REE extraction from flyash and concluded that the technology “has the potential to significantly reduce U.S. dependency for Rare Earth Elements (REE) on foreign suppliers.”

The Chinese believe coal flyash is already a very attractive source for REEs and are pursuing it aggressively. One reason is that the CO2 emissions are 75 percent less than from extraction through mining.  The coal is already in a powdered condition.  Reducing an ore to a powder takes lots of energy.

This new approach would be more energy efficient than others and would be more cost effective.  Since it is the marriage of two proven processes, the development effort will be minimal.  The McIlvaine Company does not have any patents or proprietary interest in the technology. It serves industry in a consulting role part of which is to identify novel opportunities.  For more information click on: N043 Fossil and Nuclear Power Generation: World Analysis and Forecastand N027 FGD Market and Strategies