The market for thermal and catalytic oxidizers will grow by over 18 percent from 2015 to 2019 at oil prices of $80/barrel during the period and Chinese economic growth of 7 percent per annum.  At $40/barrel and 2 percent economic growth in China, the oxidizer market growth will only be 4 percent.  These are the latest forecasts in N007 Thermal Catalytic World Air Pollution Markets published by the McIlvaine Company. (www.mcilvainecompany.com) 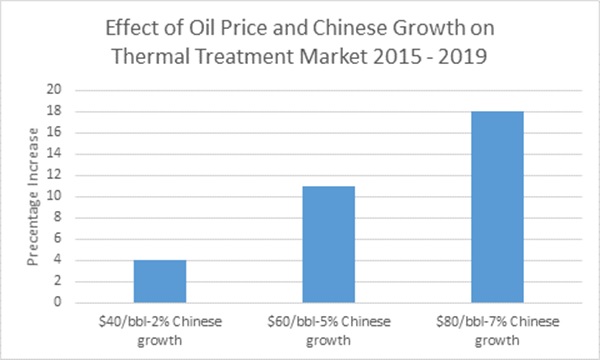 There are a number of variables which will determine growth for the oxidizer market. New insights are continually generated which justify changes in the forecasts.  The Iran nuclear agreement is just one example. The plunging economy in China and the drop in oil prices to $40/barrel are the most significant.

Lower oil prices will result in less oil and gas drilling activity.  However, this sector in 2015 represents just 15 percent of the total market. The lower prices could actually benefit the transportation segment which includes oxidizers for automobile paint finishing. The direct impact of oil prices is therefore only a maximum 2 percent drop in the market.

However, lower oil prices will result from lower Chinese economic growth. So we can assess market forecast variations based on this China parameter and assume there is an oil price correlation.

Some of these developments are more predictable than others.  The low oil prices lead to lower extraction activity which eventually leads to shortages and higher prices.  On the other hand, the Chinese economy, wars, oil spills and earthquakes cannot be easily predicted.  As a result, there will be the need for continuous changes in the forecasts to take into account the surprises.