Recent estimates of annual global mercury emissions from both natural and anthropogenic sources are in the range of 5,000 to 8,000 metric tons per year. These estimates include mercury that is re-emitted.

The U.S. EPA analyzed the harm from mercury and came to the conclusion that reduction expenditures as high as $30,000 per pound would be warranted.  On this basis the potential market for mercury removal would be $300 billion per year. However, the cost of removal of some mercury will be as low as $1000/ton.  The cost is related to efficiency of removal.  So, if only 60 percent of the world’s mercury or 3,000 tons per year were eliminated, the cost would be closer to $5,000/ton so the annual market would be $15 billion/yr.   This is the conclusion reached by the McIlvaine Company in Mercury Air Reduction Markets. 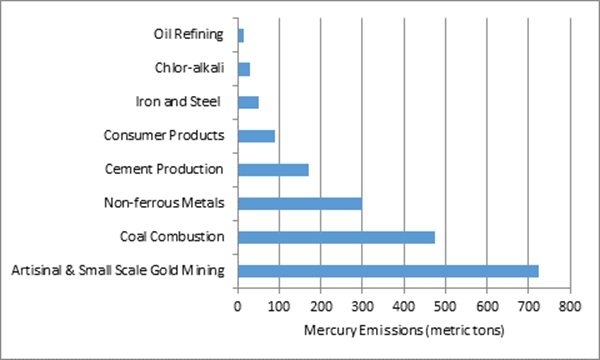 The market is presently well over $1 billion per year.  U.S. coal-fired power plants are accelerating their expenditures to meet the new air toxic regulations which will be enforced from 2016 forward Most waste incinerators around the world are removing mercury.

Most mercury expenditures are justified by the reduction in environmental harm.  However, some segments of the market are driven by other considerations.  The natural gas industry needs to remove mercury to protect equipment and pipelines.

Mercury is present in many natural gas streams.  While mercury levels can vary greatly, even low levels must be removed to avoid damage to downstream equipment.  Current methods for removing mercury from natural gas and condensate use fixed beds of mercury removal materials.  There are three types of materials: sulfur impregnated activated carbon, metal sulfides or oxides on an alumina carrier, and silver impregnated molecular sieves.  Carbon-based sorbents are the most commonly used, but the trend is towards a greater use of metal sulfides in order to remove higher concentrations of mercury and for occupational safety and environmental reasons.

The market for mercury removal adsorbents is primarily a function that the amount of natural gas produced and the average concentration of mercury in the gas.  However, the concentration of mercury in natural gas varies greatly from region to region, from a low of 0.02 µg/Nm3 in the Gulf of Mexico to 300 to 400 µg/Nm3 in Southeast Asia.  Consequently, the largest natural gas producing regions are not necessarily the largest markets for mercury removal products.

There is a large current investment in LNG facilities in South East Asia.  It is estimated that mercury reduction processes will account for 1 percent of the capital investment.  Expenditures for equipment and replacement sorbents for natural gas from all sources will exceed $150 million/yr. in the short-term and will increase at more than 6%/yr.

China is the largest growth market.   There are scrubbers on more than 800,000 MW of coal-fired capacity.  The potential market in coal-fired power generation is four times larger than the U.S. market.  China also has five times the cement capacity as the U.S.  A large potential market is coal gasification.  To put it in perspective China’s coal consumption just for gasification will equal 10 percent of the U.S. coal-fired generator coal consumption.  Since this gas must be pipeline quality, the mercury removal expenditures will be very substantial. The likely technology to be employed is carbon beds similar to those installed by Eastman Chemical in a coal-to-chemicals plant in Tennessee.