Petrochemicals Is a Growth Market for Flow Control and Treatment

2017 will be a good year for those flow control and treatment companies selling into the petrochemical industry in East Asia.  Production for this region will exceed 45 percent of the world total.  There has been growth in the NAFTA region due to the availability of low cost natural gas, but it does not match the growth in China. 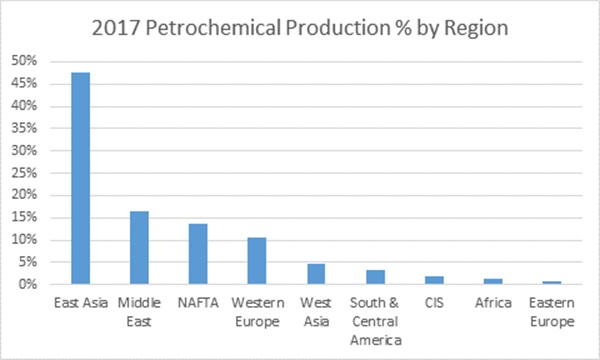 The investment in flow control and treatment in East Asia will be more than 60 percent of the total because of the feedstock source.  A large portion of the Chinese petrochemicals will be derived from coal-based feedstocks rather than natural gas.  The gasified coal must be filtered to eliminate ash. The acid gases also need to be removed before they even reach the conventional gas-to-petrochemicals process.  Coal also contains unacceptable levels of mercury which require carbon beds or ionic impregnated bead beds for removal.  Dehydration requires molecular sieves.  Generally, three molecular sieve units are needed to allow for regeneration.  The molecular sieve switching valve is expensive due to the temperature and corrosion exposure as well as the zeolite particles.

The large quantities of H2S generated in the coal gasification process require conversion to sulfur or sulfuric acid.  Scrubbers, pumps and valves are all needed for this process.

The forecasts for flow control and treatment in the petrochemical industry is addressed in N049 Oil, Gas, Shale and Refining Markets and Projects.

Individual product forecasts for the petrochemical sector are found in: